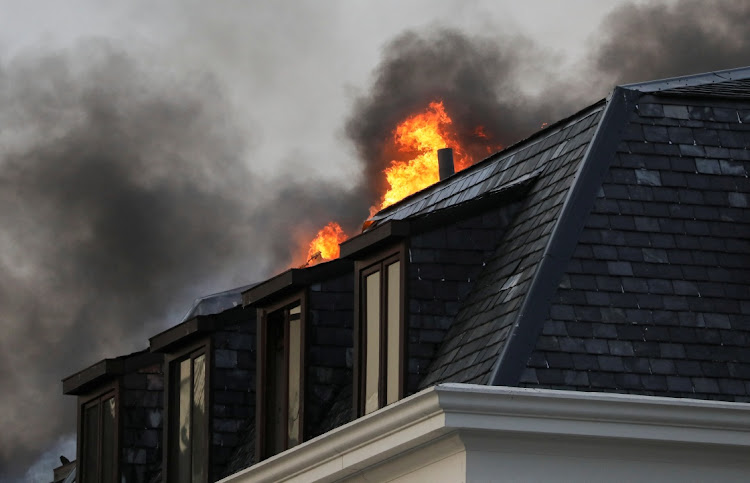 The new National Assembly building in the parliamentary precinct was gutted by fire.
Image: SUMAYA HISHAM/Reuters

“The firefighters applied a courageous and brave fighting spirit for hours last night and were able to put down the fire by midnight. Reduction in the speed with which the wind blew assisted a great deal and placed the firefighters in an advantageous position to extinguish the fire.”

Further damage has been caused, with more floors of the building, which house offices of MPs and support staff, completely gutted.

The roof of the building around where the flare-up occurred has been destroyed.

This 3rd aerial clip shared by @ParliamentofRSA shows how firefighters are trying to put out the flames. Most of the roof of the NA is on fire.#ParliamentFire @TimesLIVE pic.twitter.com/qY5b8szzrt

Six of 10 fire trucks were still at the scene on Tuesday but are expected to be withdrawn during the morning.

“With the fire contained, it is anticipated the work by the multidisciplinary team of engineers, which arrived at parliament yesterday to conduct an assessment and establish the scale of the damage, among others, will proceed,” said parliament .

Fire chief and divisional commander Simon Abrahams told a news briefing that if every ember is extinguished, he believes the building can be handed over to the authorities by the end of the day. From there, the police will investigate the forensics of the fire.

Abrahams said after Monday’s flare-up, the new National Assembly building was completely destroyed “from the bottom to the top”.

In the old National Assembly, the fifth floor — where the gym and offices are situated — was destroyed and the floors beneath, especially the fourth floor, suffered water and smoke damage.

“Yesterday’s fire completed the destruction of the new National Assembly building. It needs a lot of rehabilitation to get back to where it was.”

Abrahams explained how the fire reignited.

He said the roof structure was tile with copper roof corrugated sheeting.

“[It has] tile on the outside and underneath that is a bitumen waterproofing layer. Under that is a tongue and groove layer of Oregon pine. It is a very old building and that is the type of building material used in the past.

“The bitumen layer is highly flammable and I am told it was recently replaced, so it was even more so, and then there was a wooden structure. With the building being so old, there was probably a lot of dust in there and these are all flammable materials and fuels for fire.

“As soon as the south-easter came yesterday, with venting and trapped heat inside, the fire took off.”

He said the building was like an oven with heat trapped in the roof, measuring at about 200ºC, creating pressure.

“The building is a bit cooler today but unsafe for anyone going in without safety equipment or without experience in firefighting or structural knowledge. The building is not declared open for anyone until we are satisfied it is safe enough to enter.”

He said the artefact room, which contains art and heritage items, was intact.

A fire that ripped through parliament in Cape Town on Sunday has again erupted.
News
4 months ago

Public works and infrastructure minister Patricia de Lille has confirmed that a 49-year-old suspect has been arrested in connection with Sunday's ...
Politics
4 months ago

The portfolio committee on public works and infrastructure has called for a speedy investigation into the disastrous fire that ripped through the ...
Politics
4 months ago