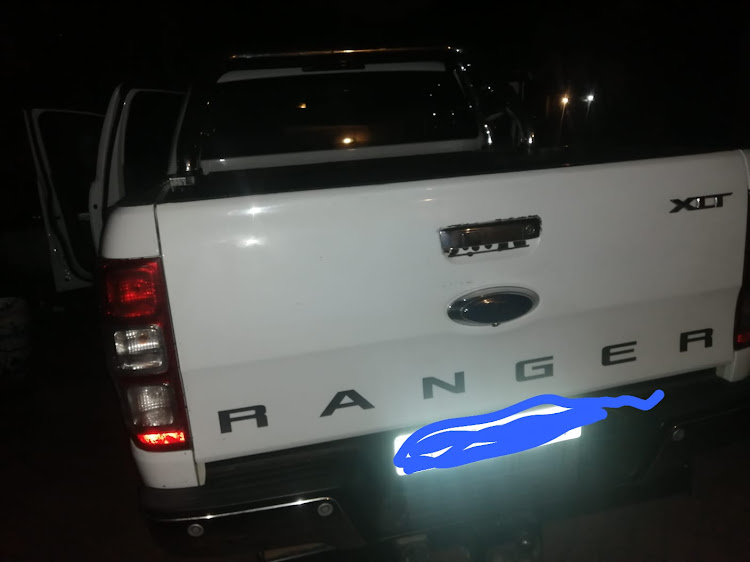 This bakkie is one of four vehicles that police seized in two operations in Gauteng on Monday. Police suspect these vehicles had been used in the commission of serious crimes, including cash-in-transit robberies.
Image: SAPS

Police in Gauteng have arrested six men in possession of high-performance vehicles that were reported stolen.

These vehicles are also suspected to have been used in the commission of serious and violent crimes, including cash-in-transit robberies.

“Police received information through crime intelligence about a safe house in Oaklands where there are high-performance vehicles and suspects that might be involved in cash-in-transit robberies,” Masondo said.

Officers from the highway patrol unit, flying squad and a private security company went to the house and spotted suspects tampering with the engine of a Ford Ranger.

A man wanted for a cash-in-transit heist which occurred two months ago was arrested at his hiding place in Soshanguve in Pretoria on Thursday, the ...
News
1 month ago

“On seeing the police, suspects fled on foot while shooting at the police. Police managed to arrest four of the suspects.”

He said preliminary investigation revealed that the Ford Ranger was stolen in Olievenhoutbosch, Centurion, in December and a Mercedes-Benz found at the scene was stolen in Wonderboompoort, Pretoria, in June 2013.

Meanwhile, in a separate incident, two suspects were arrested in Boksburg after they were found with a Toyota Hilux bakkie and an Audi Q7 that were reported stolen in Alexandra and Roodepoort respectively.

“Information was received by the police about a workshop in Boksburg where stolen and hijacked vehicles are stored.”

Masondo said police stormed into the workshop and found the two vehicles that were allegedly stolen.

Alleged parliamentary arsonist remanded in custody for a week

The man charged with setting fire to parliament buildings cut a dishevelled figure in the dock at the Cape Town magistrate's courts on Tuesday.
Politics
2 weeks ago

A sting operation has netted four suspects allegedly linked to a transnational drug enterprise in SA, Mozambique and the US, the Hawks said on ...
News
2 weeks ago

A case of murder is under investigation after a weeks-old baby boy's body was found on the N12 in North West on New Year's Day.
News
2 weeks ago