Lucky escape for passengers after Airlink plane collides with bird 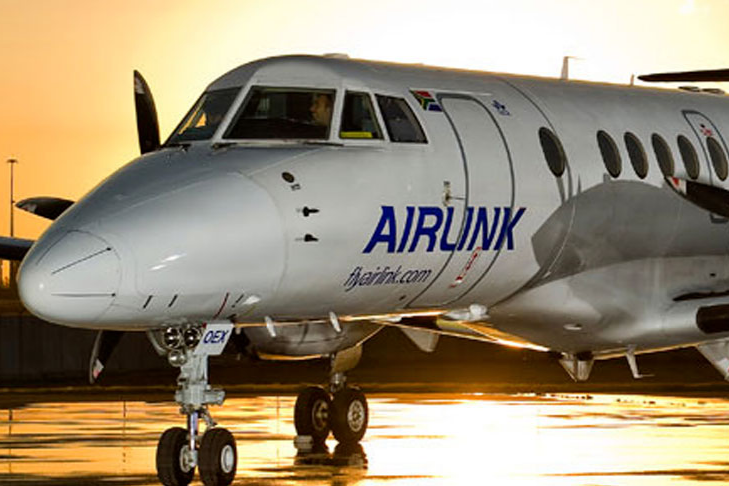 The crew and passengers on a charter flight to Limpopo had a lucky escape when their aircraft collided with a large bird, snapping off a propeller blade and sending it hurtling into the cabin.

“An Airlink Jetstream 41 aircraft operating a private charter flight struck a large bird upon landing at Venetia airfield,” the airline said, adding that nobody aboard was hurt during the incident on Monday.

The aircraft had just touched the ground when the bird, believed to be a kori bustard, flew into the right-hand propeller. The kori bustard is one of the world's largest flying birds. A large male can weigh as much as 18kg and have a wingspan of 275cm.

Pictures posted on a number of aviation websites show bits of the propeller embedded in a seat and fragments scattered on the floor of the aircraft. The blade gouged a hole in the fuselage and broke a cabin window.

No-one was seated in the affected part of the cabin.

“The most important thing is that no-one was hurt,” Airlink CEO Rodger Foster told TimesLIVE.

SA Airlink BAe Jetstream 41 (ZS-NRJ, built 1995) took serious damage to its #2 prop after a heavy birdstrike on approach to Venetia Airport (FAVM), S-Africa causing a blade to crash through the fuselage. The pilots made a safe landing and no one was hurt.https://t.co/KM1zoDYOKJ pic.twitter.com/4iAyfk1Ltz

The incident will be investigated by the SA Civil Aviation Authority (SACAA).

Foster said bird strikes were a “common occurrence” in aviation.

“Bird strikes happen. It's an aviation industry thing. There are always birds in the sky.”

While the airline had experienced numerous bird strikes over the years, this was the first time a strike had caused serious damage.

The aircraft would remain at Venetia pending the SACAA’s inspection while technicians assessed the damage. While the hole in the fuselage can be repaired, the investigators would need to assess what stress had been placed on the affected wing, Foster said.

Airlink has operated a fleet of Jetstream 41 aircraft since 1995, when it had 15 in service. The aircraft involved was nearing the end of its economic life, Foster added.

Some bird strikes have resulted in serious accidents.

In May 2021 pilot Derek Fitzgerald, 34, and student pilot Richard Morgan, 31, were killed  when their Robinson R22 helicopter plunged into the Umgeni River in Durban North after a bird hit the tail rotor. 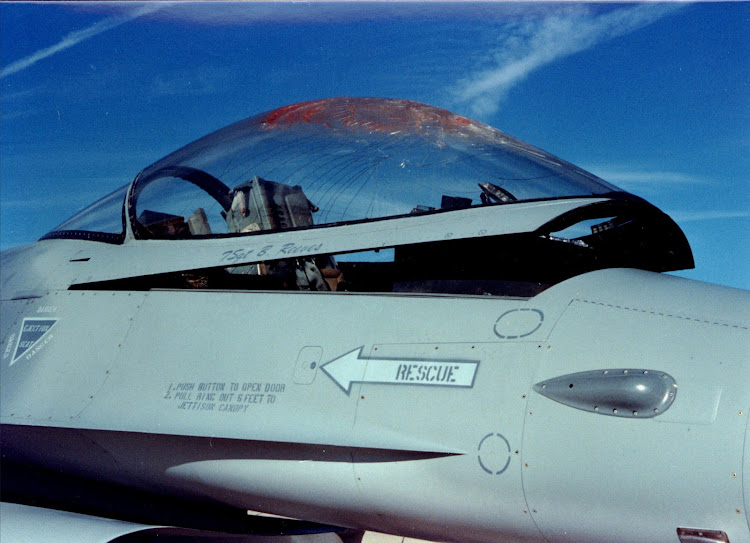 The canopy of a US Air Force F-16 fighter after hitting a bird in flight.
Image: Wikimedia Commons

While most bird strikes happen at low altitude, when aircraft are landing or taking off, some happen at high altitude.

In July 1962 an Indian Airlines Douglas C-47 Dakota was flying from Kabul in Afghanistan to Amritsar in India when it struck a vulture. The bird smashed through the windscreen killing the co-pilot.

Not all strikes end badly. In January 2009 US Airways Flight 1549 hit a flock of geese shortly after take-off from La Guardia Airport in New York, instantly losing power to both turbines. With altitude running out and no airport within reach, pilots Chesley “Sully” Sullenberger and Jeffrey Skiles ditched the Airbus A320 in the Hudson River.

All 150 passengers and five crew escaped unhurt, some without even getting their feet wet, before the aircraft sank.

Severe turbulence was the most likely culprit in a fatal plane crash in Bronkhorstspruit, Gauteng, in early December.
News
7 months ago

The right wing of a high-performance sport aircraft broke off in mid-air before it crashed at a farm outside Pretoria East, the SA Civil Aviation ...
News
8 months ago

Investigators probing a helicopter crash into the Umgeni River in Durban say a bird strike was to blame.
News
11 months ago

A pilot who had spent more than 4,000 hours at the controls died after clipping the top of a tree on a citrus farm in the Eastern Cape.
News
1 year ago