Mutilated body dumped in Pretoria dam has been identified

Zeyn Khan's mutilated body parts have been positively identified as those which had been dumped in the Roodeplaat Dam last month.
Image: roodeplaat-reserve.co.za/

The body parts found in the Roodeplaat Dam on December 28 have been identified as belonging to 43-year-old Zeyn Khan, police said on Thursday.

Khan, a businessman from Lenasia, was reported missing a month earlier on November 28 after his vehicle was found abandoned in Eldorado Park.

TimesLIVE reported how a group of Pretoria fishermen and campers made a grisly discovery when they spotted a motorist they believe was dumping the frozen and mutilated torso of a man into the Roodeplaat Dam.

The body, which was wrapped in clingwrap and whose limbs and head had been chopped off, was found on Monday night moments after the motorist stopped on a bridge crossing the Edendale River. 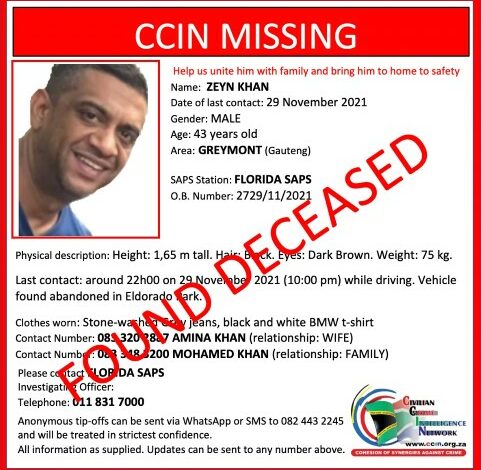 Zeyn Khan's mutilated body parts have been positively identified as those which had been dumped in the Roodeplaat Dam last month, after he was reported missing in November.
Image: Supplied

He said police divers responded to reports by a group of people who were fishing and claimed to have heard the sound of a vehicle and immediately thereafter heard what sounded like an object being thrust into the water. "The divers recovered the mutilated body of a man whose identity is now confirmed as Mr Zeyn Khan."

Netshiunda said the kidnapping and murder of Khan remained under investigation.

"Members of the public are encouraged to continue to work closely with the SAPS and report all suspicious and criminal persons and activities by calling the Crime Stop number 08600 10111, or alternatively by giving tip-offs on the MySAPS app that can be downloaded on to any smartphone."

The Mtebeni family will meet to discuss ways to challenge the sentence meted out to their daughter Nosicelo’s killer.
News
5 months ago

As the high court sitting in Middelburg was on Thursday expected to sentence the three men convicted of the murder of Gabisile Shabane-  a ...
News
6 months ago