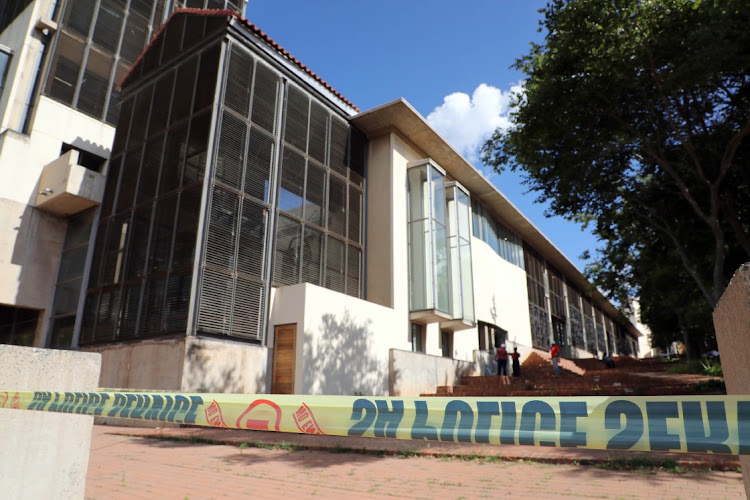 The scene of the Constitutional Court in Braamfontein, Johannesburg, where a 36-year-old man was arrested for allegedly breaking the windows of the building using a hammer.
Image: Antonio Muchave/Sowetan

Acting chief justice Raymond Zondo has voiced “grave concern” over the hammer attack at the country's apex court and says the security of the judiciary and court users requires urgent attention.

A man was arrested on Wednesday for allegedly using a hammer to smash the windows of the Constitutional Court. He is expected to make his first court appearance on Friday. He has been charged with malicious damage to property.

Zondo said in a statement on Thursday that though the incident did not hamper the work of judges and court staff, the security of the judiciary, supporting staff and people using the courts remained compromised and requires urgent attention.

“This incident comes shortly after other important state facilities have experienced unprecedented attacks, including recent threats having been made to cause damage to some superior courts.

“These attacks and threats seek to cause the destruction of these important facilities that the public rely on for the protection of their constitutional rights,” he said.

Zondo urged law enforcement agencies to do everything in their power to put proactive measures in place to avoid similar incidents in future.

“The judiciary appeals to all relevant organs of the state and functionaries responsible for state facilities and security services to ensure a threat and risk-based assessment of arrangements around critical court facilities and its important assets.”

He expressed his satisfaction that security officials and police were able to act swiftly to apprehend the suspect and prevent further damage to the building.

‘Where is crime intelligence and state security?’- SA concerned after ConCourt ‘attack’

Justice minister Ronald Lamola said the attack on the Constitutional Court is an attack on democracy.
News
5 months ago

Justice and correctional services minister Ronald Lamola has strongly condemned an attack on the Constitutional Court on Wednesday morning when a ...
Politics
5 months ago