‘Where is crime intelligence and state security?’- SA concerned after ConCourt ‘attack’ 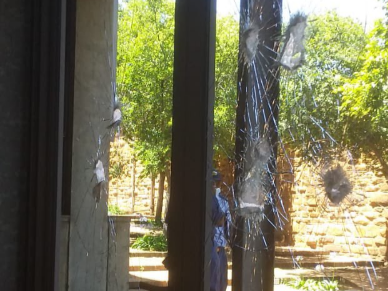 The Constitutional Court building in Johannesburg was attacked by a man with a hammer on Wednesday morning.
Image: mama canna via Twitter

Calls for effective security at state institutions and a swift response by police have flooded social media, as Mzansi reacts to the attack on the Constitutional Court building on Wednesday.

Police fired warning shots to stop a man who was found smashing windows with a hammer at the Constitutional Court in Johannesburg. The man was taken into custody and is expected to appear in court soon.

In a statement, national police spokesperson Lt-Col Robert Netshiunda said the SAPS were alerted about the incident on Wednesday morning and found the man hitting the windows with a hammer.

Netshiunda said the man told police why he was smashing the windows but information would not be made public until he had undergone psychiatric evaluation.

“The site of the Constitutional Court is a historical landmark as it represents out struggle for freedom. It was specifically designed to reflect the values of our new constitutional democracy and Nelson Mandela himself called the building the beacon of light, a symbol of hope and celebration.”

Lamola said it was an attack on democracy.

This is the latest of several incidents at state facilities.

Police are investigating the cause of the fire at parliament that started in the early hours of Sunday morning. The fire lasted for almost three days and destroyed the National Assembly building, among others.

Zandile Mafe, 49, is in police custody in connection with the incident.

According to Eric Ntabazalila, spokesperson for the National Prosecuting Authority in the Western Cape, Mafe was also charged with possession of an explosive device in addition to charges of housebreaking, theft and arson and further charges under the National Key Points Act.

The state also alleged Mafe stole laptops, crockery and documents from parliament. However, his lawyer Luvuyo Godla denied this.

Here is a glimpse into the reactions on the attack at the Constitutional Court:

Parliament - the seat of the legislature.

ConCourt - the seat of the judiciary. The day after Part 1 the #StateCapture Report is released.

All in the space of the first week of January.

We’re too playful. We need to unite as a nation against these thugs. pic.twitter.com/ZvdlsUaNWK

Just in the last 6 months:

Where is crime intelligence and state security? We are being led by morons.

Whether, the burning of Parliament, and the vandalism at the Constitutional Court are connected, is hardly the point. What is concerning is the fact that our National Key Points, are so vulnerable and accessible to all kinds of attack, by faceless/unknown forces. What is next?

The apparent coordinated attacks, physical or otherwise, on State institutions, namely Parliament, Office of the Chief Justice, Constitutional Court, SANDF base, police stations, etc., may be an indication that South Africa is going to be worse than it is, before it gets better.

Therefore #ParliamentFire and the #ConCourt shootings were expected. They're the last kick of a dying horse.#StateCaptureReport pic.twitter.com/EodFrozBUC

The ANC, through its controversial deployment committee, appears to have run a parallel deployment process to fill senior public service positions at ...
Politics
5 months ago

ConCourt victory for life partners left out of wills

The ruling comes after Jane Bwanya, the fiancée and life partner of the late flamboyant 57-year-old Capetonian and multimillionaire Anthony Ruch, ...
News
6 months ago