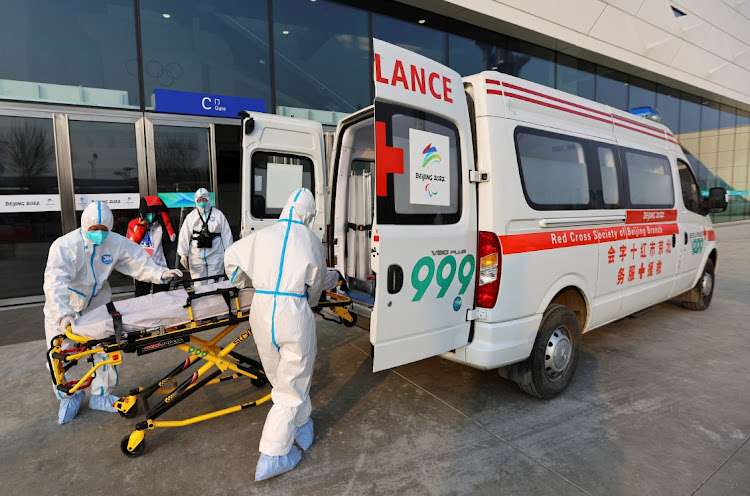 Staff wearing protective suits to protect from Covid-19 load a stretcher into an ambulance outside the main press centre ahead of the 2022 Winter Olympics in Beijing, China, on January 7 2022.
Image: REUTERS/Fabrizio Bensch

SA recorded 9,260 new Covid-19 cases in the past 24 hours, the National Institute for Communicable Diseases (NICD) said on Friday.

Guinea left three players at their training base in Rwanda after they tested positive for coronavirus, while the rest of the delegation departed for the Africa Cup of Nations finals in Cameroon.

The Guinea Football Federation said on Friday that defender Mikael Dyrestam, a former Sweden international who switched allegiance to Guinea, was isolating in accordance with local Covid-19 protocols, together with goalkeeper coach Kemoko Camara, who also tested positive. Striker Seydouba Soumah was already in isolation after testing positive.

SA has changed tack on tackling Covid-19: Why it makes sense

In the final days of 2021, the SA government eased its Covid-19 regulations.

On December 30 the government scrapped a curfew that had been in place since March 2020. It also initially announced an easing around quarantines and contact tracing but subsequently reversed these plans. Nevertheless, its approach sets a new trend in how countries are choosing to manage the pandemic.

Prof Shabir Madhi and colleagues reflect on the boldness — and the risks.

OPINION | SA has changed tack on tackling Covid-19: Why it makes sense

Ramaphosa insists he left ANCWL event due to flouting of protocols

President Cyril Ramaphosa has insisted that he abruptly left an ANC Women's League event on Thursday because it flouted Covid-19 regulations.

This is despite rumours that there was a security threat.

Speaking for the first time since the incident, Ramaphosa said he had to leave as the event did not comply with the regulations.

Gabon captain Pierre-Emerick Aubameyang tested positive for Covid-19 on arrival in Cameroon on Thursday, threatening his participation at the Africa Cup of Nations.

The three have taken PCR tests to verify the results of the antigen tests. If positive again, they will have to go into isolation and would almost certainly miss Gabon’s opening game in Group C against the Comoros Islands in Yaounde on Monday.

Royal Caribbean and Norwegian Cruise Line on Wednesday canceled sailings amid rising fears of Omicron-related coronavirus infections that have dampened the nascent recovery of the pandemic-ravaged cruise industry.

France has started giving the Covid-19 jab to children between ages of 5 and 11, and one vaccine centre in Meaux is adapting to its audience

China reported fewer Covid-19 cases on Friday as several cities have curbed movements, while a top official warned hospitals not to turn away patients after a woman's miscarriage during a lockdown in the city of Xian sparked outrage. - Reuters

Is wearing a mask for a long time bad for my health?

Wearing a mask while out in public has become part of the “new normal” we live, but could wearing a mask for hours be a danger to our health?

According to the department of health, covering your nose and mouth for a long time with a mask won't cause carbon dioxide poisoning or lack of adequate oxygen in healthy people.

Is wearing a mask for a long time bad for my health?

The Omicron outbreak in Australia's most-populous state could peak by the end of January, official modelling showed on Friday, as authorities reinstated some restrictions in a bid to slow the record spike in infections.

After containing the virus through lockdowns and tough border rules earlier in the pandemic, Australia is now suffering infection rates far higher than elsewhere in the Asia-Pacific region.

New South Wales (NSW) state Premier Dominic Perrottet postponed non-urgent surgeries and reinstated a ban on singing and dancing in clubs and pubs including in Sydney, the state capital and home to more than 5-million people.  - Reuters

Walgreens Boots Alliance raised its full-year adjusted profit growth forecast and said it expects to administer 5-million more Covid-19 vaccines as the fast-spreading Omicron variant rages across the US.

China sees Covid-19 cases across country, even after Xi’an’s drop

China’s delta variant-fuelled Covid-19 outbreak isn’t showing signs of easing, with cases now cropping up elsewhere in the country and technology hub Shenzhen on high alert, despite a drop-off in the latest epicentre Xi’an.

China sees Covid-19 cases across country, even after Xi’an’s drop

Chicago Public Schools, the third-largest US education district, canceled classes for a second day on Thursday amid a walkout by teachers demanding tougher Covid-19 protection measures, although city officials insisted schools are safe.

The stalemate, idling some 340,000 students, came after the teachers' union voted to reinstate virtual instruction and pushed for more rigorous safety protocols, including wider testing, citing the rapid spread of the highly infectious Omicron variant in recent weeks.

While most US public school districts have reopened their campuses for the new year, education systems in some major cities, including Atlanta, Milwaukee and Detroit, have opted for online learning or delayed back-to-classroom plans due to staff shortages and Omicron concerns.

The US as a whole reported nearly 700,000 new Covid-19 infections on Wednesday, the third-highest total yet recorded, just two days after Monday's record tally of almost 1-million cases. In addition to disrupting schools, the surge has affected air travel, live entertainment and courts and other workplaces, while severely straining healthcare systems around the country.

Experts say Omicron, while more highly contagious, appears less likely to cause severe illness and death than previous variants. But the sheer volume of new cases has driven Covid-19 hospitalisations sharply higher even as more medical workers are being sidelined by the illness. - Reuters

India reported 117,100 new Covid-19 cases on Friday, the most since early June, as the Omicron variant overtakes Delta in the cities.

John Nkengasong, director of the Africa Centres for Disease Control and Prevention, has said severe lockdowns are no longer the best way to contain Covid-19

#COVID19 UPDATE: A total of 46,948 tests were conducted in the last 24hrs, with 9,860 new cases, representing a 21.0% positivity rate. A further 45 #COVID19 related deaths have been reported, bringing total fatalities to 92,112 to date. See more here: https://t.co/GMVafABmnI pic.twitter.com/IEPiXo5Wse

Coronavirus updates.
News
5 months ago
Guinea leave behind three players with Covid-19 as they head to Afcon