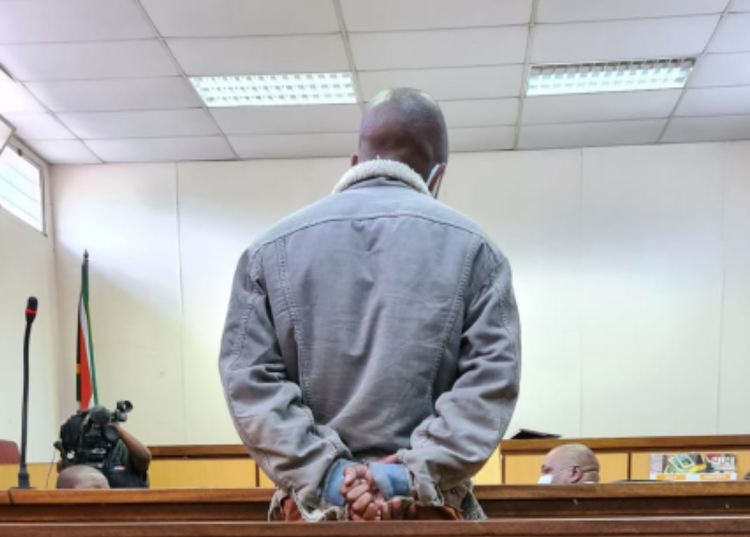 Paul Makaula was remanded in custody when he appeared in the Hillbrow magistrate's court in connection with the attack on the Constitutional Court.
Image: Alex Patrick

Paul Makaula appeared in the Hillbrow magistrate’s court on Friday for allegedly breaking windows at the Constitutional Court in Johannesburg with a hammer, causing about R50,000 in damage.

He was on parole for a murder committed in 2010.

The 36-year-old was arrested on Wednesday and charged with malicious damage to property. He has been remanded in custody and the case was postponed to March 25 for further investigation.

On Wednesday national police spokesperson Lt-Col Robert Netshiunda said police were called in the morning after a man was found breaking the windows.

When officers arrived, the man was busy with his attack. Netshiunda said he did not stop smashing the windows until police fired a warning shot.

The case was postponed to 25 March for further investigation.
The man's name is Paul Makaula. @IamAlexSweet @TimesLIVE pic.twitter.com/paKaJmmSsY

Timeslive @IamAlexSweet explains what happened in court in the brief appearance of Paul Makaula in the #ConcourtDamage case. The 36-year-old has a previous murder conviction according to the NPA and is out on parole. @TimesLIVE pic.twitter.com/q80asXmsK7

The man arrested for allegedly breaking windows at the Constitutional Court with a hammer on Wednesday is a parolee with a 2010 murder conviction.
News
1 week ago

"We can’t relax when we can see the counter-revolution coming. It's like an oncoming train," the SACP general-secretary said.
Politics
1 week ago

A man was arrested on Wednesday morning for using a hammer to smash the windows of the ConCourt in Johannesburg.
News
2 weeks ago