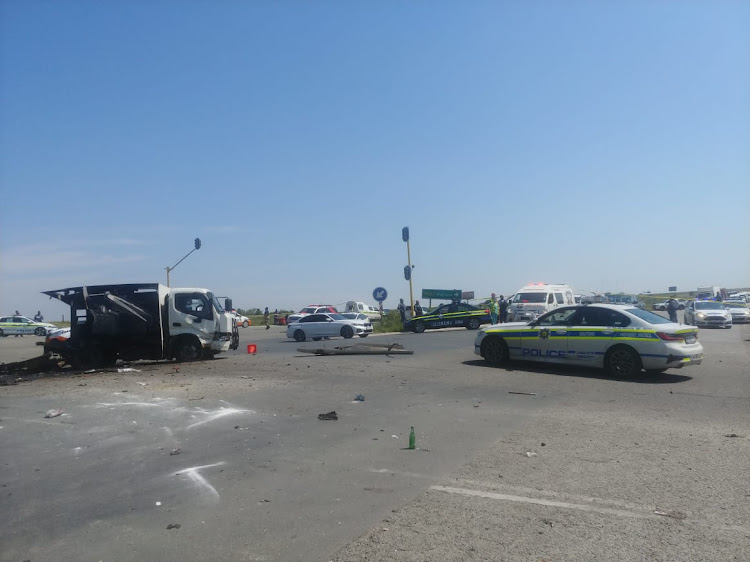 A file picture from a previous cash-in-transit heist in Sandton, Gauteng, in which robbers used the same method as in Saturday's heist on the East Rand, ramming a stolen Mercedes-Benz saloon into a cash van to force it off the road. Photo for illustration purposes only.
Image: Saps

A prison warder was killed and his wife and two children injured during a botched cash-in-transit heist on the East Rand on Friday.

The G4S security van was travelling along Van Dyk Street near Carnival City when it was rammed from behind by a Mercedes-Benz saloon, Lt-Col Robert Netshiunda told TimesLIVE.

“The driver of the cash van lost control and it rolled over a private vehicle,” he said.

The unnamed prison warder, who was driving a private car, was killed instantly.

His wife and two children were taken to hospital where their condition was stable, Netshiunda said.

“It is very tragic,” he said. “It happened at 6pm and they [the family] were on their way home.”

Two spent cartridges were found at the scene. The robbers had fired into the air in an apparent attempt to intimidate the guards who were trapped in the van.

“But they were unable to get the money,” said Netshiunda, adding the would-be robbers had abandoned the wrecked Mercedes at the scene and fled in an Audi and a Golf.

The Mercedes had been reported stolen in Jeppe in December.

Police in Gauteng have arrested six men in possession of high-performance vehicles that were reported stolen.
News
3 weeks ago

Private security guards securing refugees' monthly allowances were overpowered and robbed of US$60,360 (R962,742) at Tongogara Refugee Camp at ...
News
3 weeks ago

From clapbacks to the Woolies 'looter': 10 top stories of the year

Here's what you were reading this year.
News
3 weeks ago

The gang of 12 rammed a Mercedes-Benz into a G4S van at about 6.45pm on Wednesday, shortly after it left the Silverstar Casino.
News
1 month ago