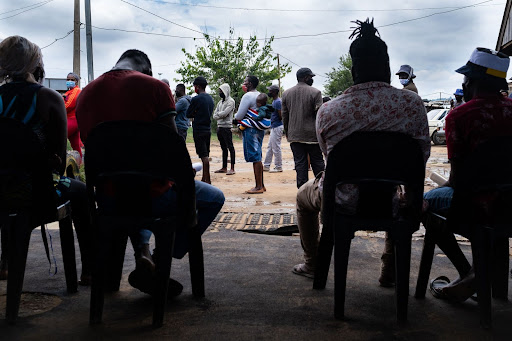 SA must finalise a policy on vaccine mandates for certain settings and activities as it seeks to fully reopen its coronavirus-battered economy, the ruling party said.

“The success of our economic recovery depends to a large measure on our ability to effectively manage Covid-19 as this virus is likely to remain part of our lives for the foreseeable future,” President Cyril Ramaphosa said at a rally in Polokwane on Saturday.

The event  marked the 110th anniversary of the ANC’s founding.

Africa’s most industrialised economy contracted the most in at least two decades in 2020, and unemployment surged to a record 35% last year as virus-related lockdowns shuttered businesses, stalled trade and weighed on tax revenue. The government started offering Covid-19 booster shots in December with only about 45% of adults fully vaccinated.

The government started paying a temporary social relief grant to jobless people during the pandemic.

With payments due to end in March, ministers and academics have proposed the introduction of a permanent basic income grant in one of the world’s most unequal societies. The big sticking point is how it should be funded within a stretched national budget.

There’s a clear need for some form of income support for the unemployed and poor, based on affordability and sustainability, Ramaphosa said.

“This in many ways is what is causing comrade Enoch Godongwana to lose more and more of his hair,” Ramaphosa said, referring to the finance minister.

This issue “is a huge challenge t we have to find some resources for”, he said.

Saturday’s anniversary event comes at the difficult time for the ANC, which is Africa’s oldest political movement and has ruled since SA’s first multiracial elections in 1994. Its support slipped below 50% for the first time in a municipal vote two months ago, a backlash against what is seen as its slipshod management of towns, high poverty levels, and a lack of jobs.

Zuma and other top officials were found to have been at the centre of an orchestrated campaign to loot state funds, while the party was found to have benefited from the proceeds of corrupt deals.

Ramaphosa reiterated that party members formally charged with corruption and other serious offenses must immediately step aside from all leadership positions in the ANC and government, pending the finalisation of their matters. Those who don’t step aside may be suspended, he said.

Insecurity is also a mounting concern. Zuma’s incarceration for flouting a court order to testify before the state capture inquiry triggered riots in July last year that left 354 people dead. Last week a fire ravaged parliament, and a building housing the top court in Johannesburg was vandalised. Suspects have been arrested in connection with both incidents.

The gains since 1994 are “threatened by a concerted effort to destroy the institutions of our democratic state, to erode the values of our constitution and to undo the social and economic progress made”, Ramaphosa said.

Turning the situation around will be critical for Ramaphosa, who succeeded Zuma as ANC leader in 2017 after campaigning on an anti-corruption ticket and is likely to seek reelection to the post at a party conference scheduled for December.

President Cyril Ramaphosa delivered the ANC’s January 8 statement during the party’s 110th birthday celebrations in Polokwane, Limpopo. In his ...
Politics
4 months ago

ANC President Cyril Ramaphosa has called on the government to finalise vaccine mandates.
Politics
4 months ago

Only 2,000 party faithfuls to be allowed inside the stadium
Politics
4 months ago