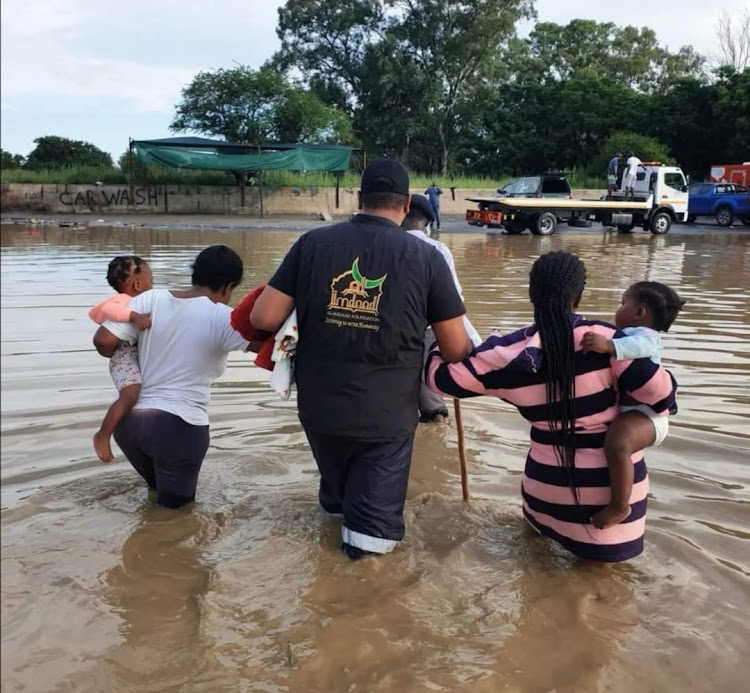 Residents in Ladysmith and Msinga in KwaZulu-Natal have been evacuated after heavy rain resulted in rivers bursting their banks, causing extensive flooding and damage.

Disaster management teams together with police search and rescue crews and non-profit organisations have been working to rescue, evacuate and temporarily rehome affected residents.

On Monday the provincial co-operative governance and traditional affairs (Cogta) department said about 70 residents had been evacuated from flooded areas in Ladysmith and moved to an indoor sports centre.

“Disaster management teams are working with non-governmental organisations to provide immediate relief such as blankets, sponges and hot meals to the affected residents. Ladysmith's business sector has been hit by the floods.
Image: Al-Imdaad Foundation

“The town of Ladysmith received significant rainfall over the weekend which led to the Klip River bursting its banks and flooding parts of the central business district. So far there have  been no reports of loss of life or injury,” the department said

In Msinga, heavy rain caused the uThukela River to burst its banks and flood surrounding areas.

“We have recently experienced inclement weather conditions which have left a trail of death and destruction in their wake. So far 25 people have died with one person missing and R3.3bn in damages has been incurred during the summer season. We appeal to residents to be cautious,” said Cogta MEC Sipho Hlomuka.

The Al-Imdaad Foundation, a non-profit organisation in Estcourt which has been providing relief, said in a Facebook update about Ladysmith that “much of the road network in the CBD is still waterlogged due to the large volumes of water that have entered parts of the town.

“Many families were evacuated and rescued through a collaborative effort between Al-Imdaad Foundation, the police canine unit and police search and rescue and disaster management. 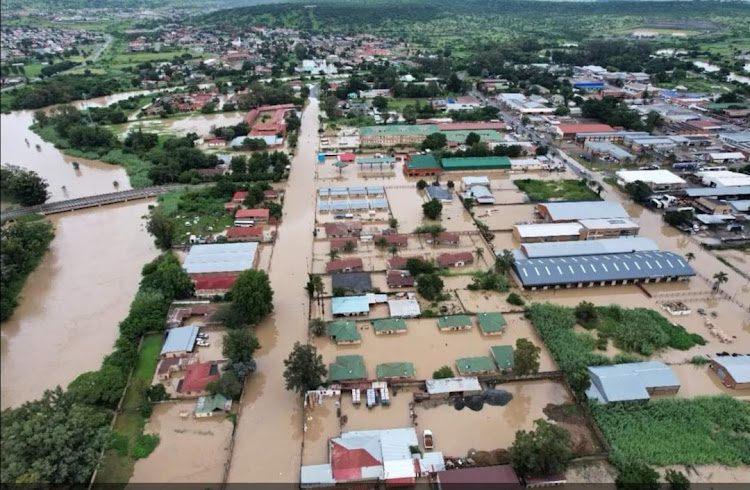 An aerial view of the flooding in Ladysmith.
Image: Al-Imdaad Foundation

“Several families were rescued from a low-lying area of the CBD, including an elderly lady who was taken to her family.”

The foundation said it provided rubber dinghies for the evacuation.

“Many of the storm water drains are blocked which is pushing water back into residential areas.

“Sewerage water has been pushed out, creating a potential health hazard.

“Once the flood waters in the river system lowers, water from the roads and CBD will start to recede and proper clean-ups and assessments can be performed. We will then have a clearer picture of the type of assistance needed going forward,” the foundation said.

A total of 186 KwaZulu-Natal schools have been affected by recent storms, with the province in a race against time to ensure they are functional when ...
News
5 months ago

Is SA heading for the wettest summer on record? Overflowing Vaal brings a flood of problems

Eighteen months ago, marina owner Kathy Manten was almost high and dry, with barely enough water in the Vaal Dam to keep her boats afloat.This week ...
News
5 months ago

North West province will ask national government for R30m to rebuild or repair houses damaged or destroyed in flooding during heavy rain in December.
News
5 months ago