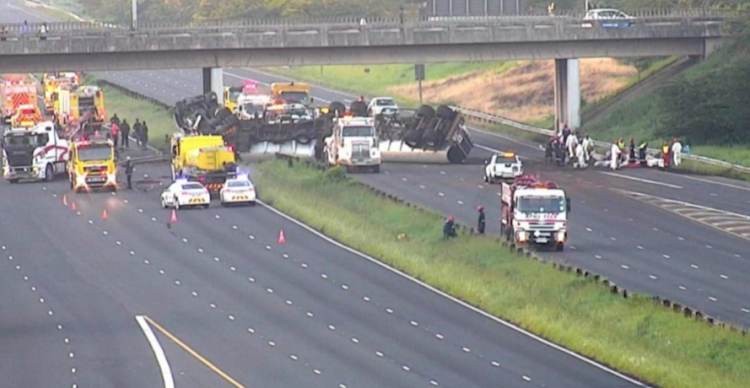 Durban’s N2 freeway is expected to be partially shut for hours after a truck transporting petrol overturned on the busy road during the early hours of Tuesday.

“A truck believed to be carrying petrol had lost control and overturned before crossing over the centre median and colliding with a biker and another vehicle.

“The biker sustained critical injuries and was stabilised on the scene by paramedics before being rushed to a nearby Durban hospital for further treatment.

“The freeway is currently still closed in both directions for the recovery of the wreckage.

“At this stage the events leading up to the accident are unknown, however SAPS were on the scene and will be investigating further,” said Jamieson.

Two struck by lightning, flash floods on highway — and a runaway ‘double-decker’

Paramedics are on the scene of a multi-vehicle collision near KwaZulu-Natal's Mariannhill toll plaza in which a young child was killed.
News
6 months ago

Provincial police spokesperson Sgt Christopher Spies said the two accidents happened on the N1 near Beaufort West and Three Sisters during the early ...
News
6 months ago