Heartbreaking farewell for Daveyton pupils who died in tragic shooting 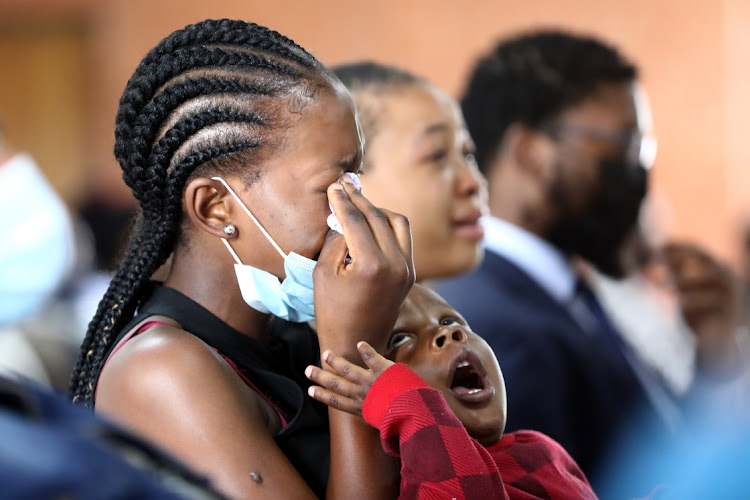 A picture of a friendship so tight that it bordered on brotherhood was painted of the relationship between two boys who died in a tragic shooting  in Daveyton, Ekurhuleni, on their first day back at school last week.

A memorial service was held for the boys — Njabulo Ndhlebe and Zukisa Majola — at the Lesiba Secondary School on Tuesday.

The pair died after sneaking out of school with another friend last Wednesday. The boys were headed to Zukisa's home, where he apparently wanted to show his friends his late grandfather's revolver.

The families of two 16-year-old pupils from Lesiba Secondary School in Daveyton, Ekurhuleni, have shed new light on Thursday's tragic incident in ...
News
4 months ago

The gun reportedly accidentally went off while in Zukisa's hands, striking Njabulo.

In disbelief, the other friend ran out of the home but Zukisa ran after him, begging him to help him.

The ringing out of the gunshot and the boys running from the direction of the sound caused community members to gather and ask questions.

In a panic, Zukisa reportedly entered his garage, locked himself inside and shot himself dead.

At Tuesday's memorial service, speaker after speaker expressed how the two boys were inseparable, even to their death. 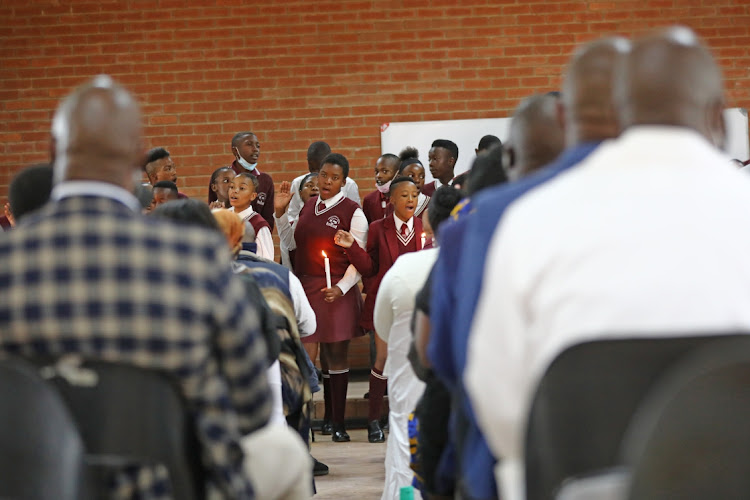 The Lesiba High School choir bids farewell to their classmates in song at a memorial service at the school.
Image: Thapelo Morebudi

“I am told Zukisa would dodge his own class to go where Njabulo was,” said Ekurhuleni education district director Busi Luthuli.

“If that is not friendship, I don't know what it is. They were inseparable. Even death could not separate them. If they were a married couple, I would say that they stuck to their vows of until death do us part,” said Luthuli.

While a sombre mood had filled the hall where mourners, including their teachers, classmates, friends and family had gathered, bursts of laughter would fill the hall when their classmates took to the stage to recall fond memories of them.

They are probably looking at us, not in pain.  It is us who remain behind who have to deal with the pain

“Zukisa was like a friend to me, but Njabulo wanted me. I would have been his girlfriend but I chose to remain just his friend,” said one schoolgirl, causing mourners to laugh in disbelief at her revelation.

Another friend of theirs, Sabelo, expressed how he always got in trouble because of Zukisa.

“I remember telling him I am not gay but I love you so much,” said the pupil.

He recalled how he had seen Zukisa on the day he  died. The pair had bumped into each other on the first day of school where Zukisa had just received his report card, confirming he had passed to Grade 10.

“I saw him that morning and he high-fived me after he found out he had passed,” said Sabelo. 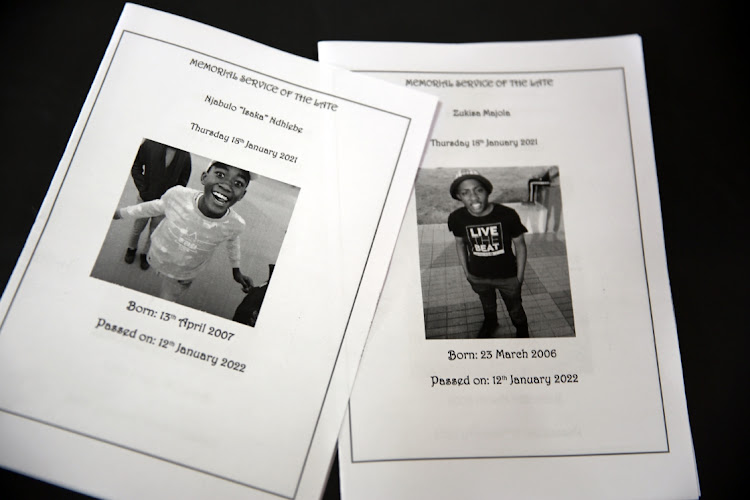 The programmes of the memorial service of two Lesiba High School pupils, Njabulo Ndhlebe and Zukisa Majola, who died in a tragic shooting incident on the first day back at school last week in Daveyton, Ekurhuleni.
Image: Thapelo Morebudi

The next time he saw his friend, he was lying dead at his home, from a self-inflicted gunshot wound.

Sabelo was one of several pupils who had rushed to the scene where the pupils had died and had seen the lifeless bodies of the two boys.

Meanwhile, Sibusiso Nkabane — a representative of the Ndhlebe family — spoke of how the families had united in their grief, saying it was a “beautiful moment”.

“Both families lost sons who were best friends. They are probably looking at us, not in pain. It is us who remain behind who have to deal with the pain,” said Nkabane.

Durban family reeling after brothers, aged 7 and 9, get into difficulty in resort pool

Two brothers got into difficulty while swimming at Alpine Heath Resort in the Drakensberg at the weekend. The younger boy, aged seven, drowned, while ...
News
5 months ago

Three matric pupils from Hoërskool Ben Viljoen in Groblersdal in Limpopo have died in a car accident, the school announced at the weekend.
News
5 months ago