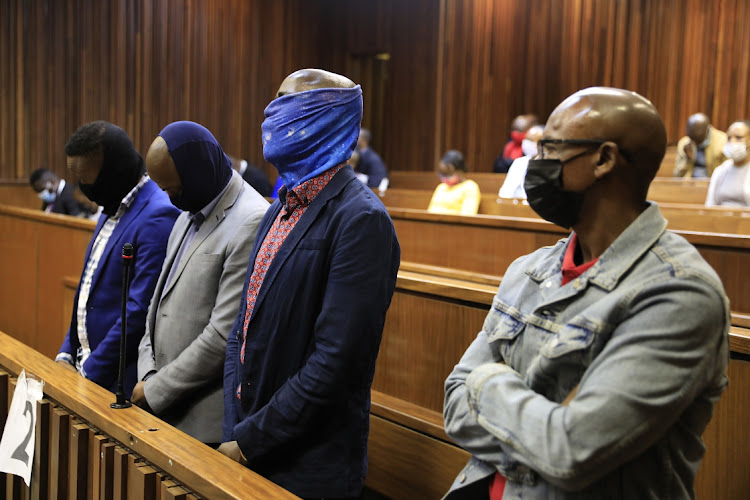 One of the four police officers accused of murdering Mthokozisi Ntumba stormed the Johannesburg Institute of Engineering and Technology and dragged out students who ran for cover when shots were fired.

Mfuniseni Mlungisi Hlela, who works as a security officer at the institute in Braamfontein, told the Johannesburg high court on Tuesday that he was on duty when Ntumba was shot dead, allegedly by police officers, on March 10 2021.

Ntumba, 35, died during student protests in Braamfontein in March last year. The father of four was shot after leaving a doctor's appointment in the area.

Hlela said the institute has two entrances. The main one, he said, led to an access-controlled interior entrance.

“The main entrance is always open and the second is access-controlled. I have to sign the person in once they have gone through the first entrance,” he said.

He was signing in a person who visited the institute to gather information when there was a commotion outside.

“I heard a noise coming from outside and I heard gun shots. There were students outside and they ran into the building. They were waiting outside for a bus.”

He said he went out to investigate what was going on.

“There were students outside, and police officers who were shooting at the students.”

He said one police officer was inside, others were outside. They had been travelling in an armoured vehicle.

“The one who was inside was grabbing the students.”

“When they [police] arrived, they shot at the students who were at the gate. They were shooting at close range,” he said.

He saw someone lying on the ground with a plastic bag next to him.

Hlela said some students showed him injuries they sustained during the shooting.

“They said they were shot by the police.”

The trial of four police officers accused of the murder of Mthokozisi Ntumba during student protests last year started in the Johannesburg high court ...
News
5 months ago

Mthokozisi Ntumba had gone to see a doctor in Braamfontein, Johannesburg, for treatment for a stomach ache on the day he was allegedly shot dead by ...
News
5 months ago

Police have laid bare a lack of discipline which has tainted the image of the SAPS.
Politics
1 year ago