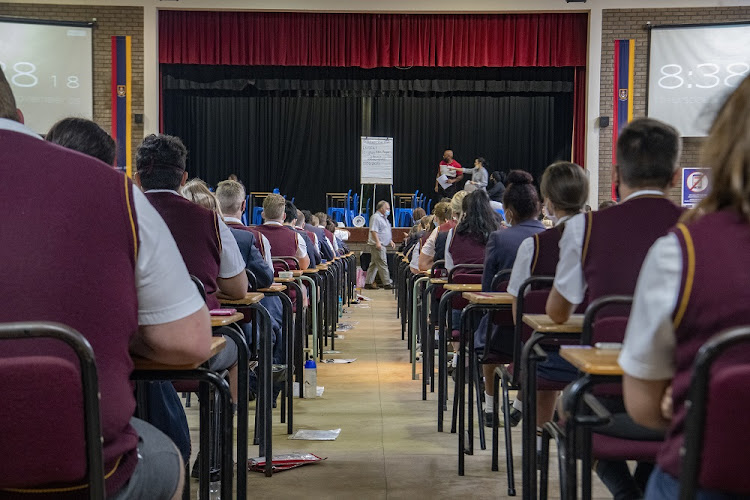 Private school pupils who wrote last year’s matric exams through the Independent Examinations Board (IEB) have passed with flying colours, after achieving a pass rate of 98.39%.

A total of 12,857 full-time and 968 part-time candidates from 238 examination centres in 267 venues across Southern Africa wrote the IEB National Senior Certificate exams.

Pupils who wrote the exams through the other private assessment body, the South African Comprehensive Assessment Institute (Sacai), recorded a 76% overall pass rate which was up by two percentage points from 2020.

At least 90% of the 3,994 candidates writing through Sacai were homeschoolers, while 10% were from private schools.

A total of 1,114 pupils writing through Sacai achieved entry into degree study while 672 achieved diploma passes and 276 higher certificate passes.

The matric results for pupils attending government schools will be released on Friday.

Keith Maseko, CEO of Sacai, said: “Studying from home enables learners to obtain a high-quality education while retaining the flexibility of their private lives. Everyone is entitled to a good education and a chance for a successful career, and this is exactly what distance education can provide.”

He said that since its establishment in 2012, Sacai has seen a steady increase in learner enrolments.

“There are many reasons why parents and learners seek alternative education solutions, some of which include religion, culture, finances or learning difficulties that require special attention not offered by most conventional classrooms.”

Meanwhile, Anne Oberholzer, CEO of the IEB, said the class of 2021 had to dig deep mentally and emotionally to find the strength to face the tremendous challenges of a radically changed teaching and learning environment of the past two years.

“They truly deserve the accolades they receive.”

She said the journey for grade 12 candidates of 2021 was somewhat different, with school closures from as early as March 2020 and then sporadically throughout the year, continuing right through their grade 12 year.

MATRIC RESULTS | Claim your fame and you could win R10,000

You’ve done the work and it’s time to claim your fame. Register now to receive your results
News
6 months ago

“They experienced disruptive change of an unprecedented nature within a relatively short time. Most grade 11 learners in 2020 spent much less time at school and were essentially the test cases of the greatest online tuition experiment of our time.”

She said that while online learning cannot replace a good teacher in person, “it is far better than no teacher and no guidance”.

“The journey to uncover the true worth of technology in the classroom has begun in earnest and it will be the teachers with initiative, imagination and creativity that will light the way.”

St John’s College in Johannesburg has once again posted outstanding results after all 140 matrics not only achieved a bachelor pass but also bagged 544 distinctions in total.

Five students, Alexander Sittmann, Tivian Reddy, Sazi Bongwe, Kapil Ramlall and Christopher Pearce, have been included on the IEB’s outstanding achievements list after achieving within the top 5% of candidates in six or more subjects.

St John’s executive headmaster Stuart West said these achievements would be exceptional in any circumstances “let alone after two years so severely affected by the pandemic”.

“Our students have demonstrated resilience, a disciplined work ethic and academic responsibility which is evident in their academic excellence.”

West said that it had been an honour working with the remarkable pupils, adding: “While we celebrate our many top achievers, we recognise and celebrate every matric who worked incredibly hard to achieve their personal best in their final examinations.”

The headboy, Sazi Bongwe, who has been accepted to study at the prestigious Harvard University in the US, was the school’s top performer after bagging nine distinctions and an average of 95.9%.

18-year-old Sazi Bongwe from Oaklands, Johannesburg, received confirmation of his admission to the Ivy League institution on Friday morning.
News
5 months ago

The 18-year-old from Oaklands in Johannesburg received confirmation of his admission to the Ivy League institution in December.

According to the Times Higher Education World University Rankings 2022, Harvard and the California Institute of Technology are both ranked second among the top universities in the world.

Speaking on Tuesday on the eve of the release of the IEB results, Bongwe, who achieved distinctions in all nine subjects in the matric preliminary exams, said he was confident of achieving distinctions “but was on the edge about advanced programme maths”.

“It was a hard paper and everybody was concerned about it. I think the Harvard decision took a lot of the pressure off these results. There’s a bit of nervousness and anxiety but I have confidence as well.”

From turning their tragedies to triumph and aiming above and beyond the skies, these are the stories of the cream of the crop of King David High ...
News
4 months ago

The country’s most expensive private school, Hilton College, registered a 100% pass rate with 98% of candidates achieving a bachelor pass.

Pupils produced a total of 215 distinctions.

Richard Karlson, who achieved nine “A” symbols, was declared the scholar of the year.

Hilton College headmaster George Harris said: “We encourage a growth mindset and seek to instil in our boys a sense of curiosity and a lifelong love of learning. Every year and in many ways, we celebrate the effort made by all of our teachers and boys as they persevere to grow into the best versions of themselves.”

Dainfern College achieved a 100% pass for both the IEB and Cambridge A-level academic streams.

“The year 2021 was by no means an easy academic year as the pandemic necessitated the continuation of an adaptable academic delivery. The exceptional sets of IEB and Cambridge results achieved by the class of 2021 are testament to their resilience, grit and commendable work ethic, as well as the dedication and professionalism of college staff,” the school said.

At JSE-listed Curro, the matric pass rate was 99%, from 1,774 pupils across 31 campuses who sat for the exams.

“For our 2021 matrics, it is the second year in which they have experienced disruptions to studies and the results show the calibre of these learners. One must not forget the journey a learner takes to get to grade 11 and 12; the 2021 class endured extreme disruptions, with most learning having taken place at home. Curro’s swift transition to virtual learning enabled learners to mitigate the effects of the pandemic significantly, but still required them to adjust and adapt especially as they may have lost family members or had challenges at home.

“We commend our learners who have proven that they have talent and the acumen to produce remarkable results, despite circumstances beyond their control,” says Andries Greyling, Curro Holdings CEO.

WhatsApp 'cheat sheet' for matrics even had wrong answers

A new trend of unauthorised and early access to question papers was detected at specific exam centres in KwaZulu-Natal and Gauteng.
News
4 months ago

KwaZulu-Natal education MEC Kwazi Mshengu has promised to fix storm damage at a high school in uMgungundlovu.
News
4 months ago

With days to go before the release of the 2021 matric results, an investigation launched into the leaked 2020 question papers has found that the ...
News
4 months ago