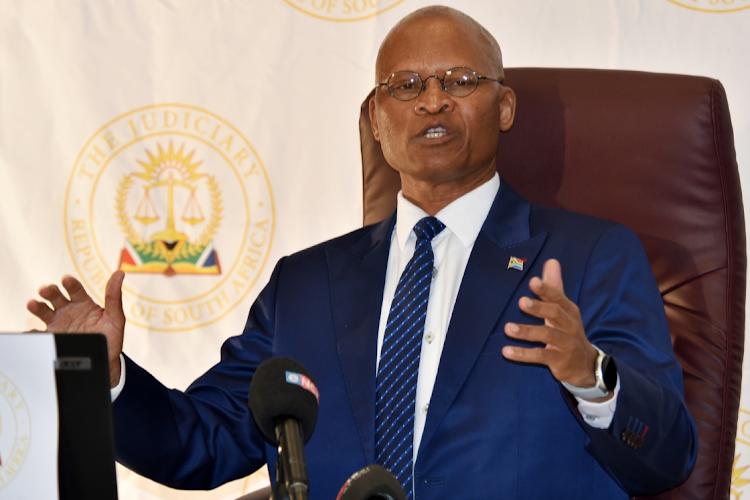 Former chief justice Mogoeng Mogoeng has been ordered to apologise for becoming involved in political controversy or activity, and for involving himself in extrajudicial activities. File picture.
Image: Freddy Mavunda

Former chief justice Mogoeng Mogoeng did in fact breach the code of judicial conduct when he made pro-Israel comments during a webinar 18 months ago.

The ruling was made by the Judicial Conduct Appeals Committee on Thursday, with the committee also ordering Mogoeng to apologise.

Mogoeng was heavily criticised for the comments, which promoted a formal complaint from the organisations Africa4Palestine, SABDS Coalition and Women’s Cultural Group.

The Judicial Conduct Committee, which heard the complaint, in April last year found Mogoeng guilty and ordered him to apologise unconditionally.

In a statement issued on Thursday night, the Judicial Conduct Appeals Committee ruled, in a majority decision, that Mogoeng had breached the code in that he, through his utterances, “involved himself in political controversy”.

“The committee further found that Mogoeng breached the code of judicial conduct in that he was involved in extrajudicial activities which are incompatible with the confidence in and the impartiality of judges,” a statement from the appeals committee read.

As a result, the appeals committee ruled that Mogoeng must issue an “unconditional apology for becoming involved in political controversy through his utterances at the online seminar (webinar) hosted by the Jerusalem Post on June 23 2020".

“A copy of the apology must be released by Mogoeng to the office of the chief justice and the media within 10 days of this decision,” the appeals committee said.

The offence stems for a webinar in June 2020, when the moderator, editor-in-chief of the newspaper, Yakoov Katz, asked Mogoeng about his love for the Jewish people, for Israel, for the state of Israel and his thoughts on the tense diplomatic relations between SA and Israel.

Mogoeng said he was under an obligation as a Christian to love Israel, to pray for the peace of Jerusalem which actually means the peace of Israel.

Citing Biblical scripture, he said: “The first verse I give is in Psalms 122, verse 6, which says: ‘Pray for the peace of Jerusalem, they shall prosper that love thee,’” Mogoeng said. “Also Genesis 12, verses 1 to 3, says to me as a Christian, if I curse Abraham and Israel, the Almighty God will curse me too.

“And I cannot as a Christian do anything other than love and pray for Israel because I know hatred for Israel by me and for my nation will, can only attract unprecedented curses upon our nation.”

The three organisations that took Mogoeng to task complained primarily that Mogoeng committed wilful or gross negligent breaches of the code of judicial conduct, in that he had become involved in political controversy or activity. The other complaint was that he involved himself in extrajudicial activities.

In the clip of Mogoeng's address at the 17th Nelson Mandela Annual lecture in 2019, he spoke against those trying to capture the judiciary.
News
5 months ago

Application is based on former chief justice's comments about SA's foreign policy towards Israel.
News
6 months ago

“There are treasures that are hidden until the right time, and as He [God] grows our currency and our economy, those treasures will be used to pay ...
News
7 months ago