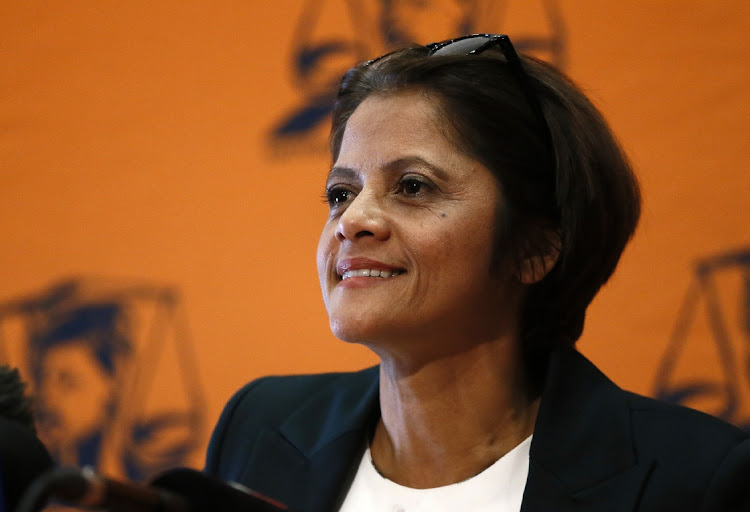 Hermione Cronje is introduced during a media briefing as the head of the Investigating Directorate in the office of the National Director of Public Prosecutions on Friday, May 24 2019.
Image: Phill Magakoe/Gallo Images

Outgoing National Prosecuting Authority (NPA) Investigating Directorate head advocate Hermione Cronje may have been pushed to resign instead of quitting of her own accord, according to her resignation letter which TimesLIVE has obtained.

In a letter addressed to National Director of Public Prosecutions advocate Shamila Batohi dated November 30, Cronje references previous correspondence she received from Batohi that appears to suggest her departure was far from sudden.

“I have taken some time to consider your letter of October 22 proposing options for my departure from the NPA and the role of Investigating Director,” she wrote.

“This role has been all consuming. It has taken a toll on my health and on the wellbeing of my family. It is unfortunately impossible to sustain any longer. I have despaired about making this decision given how critical the war on corruption is for the future of our country,” she added.

At a press conference on December 6, a week after Cronje’s letter, Batohi said Cronje had wanted to leave for some time, but that she had asked her to stay on. She said she later realised it would be “in the interest of all concerned” if Cronje left.

Cronje, who had been in office for 30 months at the time of her resignation, did not attend the media briefing, which Batohi downplayed due to the fact that she did not sit on the NPA’s executive committee.

Batohi at the time denied that the NPA was in any crisis.

I therefore accept your offer to ask the president to release me from the office of Director of Public Prosecutions and that of investigating director with immediate effect and stand ready to begin the hand-over process.

However, Cronje’s letter appears to suggest Batohi had a greater hand in her departure than what she had suggested.

“I therefore accept your offer to ask the president to release me from the office of Director of Public Prosecutions and that of investigating director with immediate effect and stand ready to begin the hand-over process,” she wrote.

She further hints at tensions between her and Batohi, which the latter downplayed during the announcement of her resignation.

Cronje wrote: “Whilst our journey has been fraught with challenge, I know we both are motivated by the love of our country and our common passion for justice.

“I trust this will hold us in good stead as we navigate the transition. I will be guided by you how we move forward, subject only to a request that I be permitted to inform ID staff of my departure myself.”

A week after her resignation, the Sunday Times reported that Cronje had resigned in despair, despondent at a “skills catastrophe” at the NPA which has too few staff with the skills to prosecute those involved in state capture or grand corruption.

Insiders say the reason for Hermione Cronje's departure from the ID was her frustration at not having the resources to bring state capture culprits ...
News
6 months ago

The paper reported that in an address to staff after her resignation, a “devastated” Cronje said the space for her to make an impact “had closed” and she promised she would help continue the fight against state capture from outside the organisation.

She alluded to the skills deficit besetting the NPA in her resignation letter, saying: “... with the appropriate support, I do believe the ID is poised to make a significant impact on corruption going forward”.

NPA spokesperson Adv Mthunzi Mhaga said on Thursday that NPA management would not be responding to questions sent on Wednesday morning. He referred TimesLIVE to the statement Batohi read out at the media briefing in December, in which she said, “This type of leadership change is normal. It is not a sign of crisis or collapse.”

The Investigating Directorate will be assisted by Asset Forfeiture Unit head Advocate Ouma Rabaji during its leadership transition while a new head is sought. Cronje is set to leave by May.

Cronje’s resignation took place just over a month before the release of the first volume of acting chief Justice Raymond Zondo’s report of his state capture inquiry.

What have the NPA and Hawks been doing during the Zondo commission?

Establishing a task force only now to review Zondo commission cases speaks to an appalling lack of leadership and understanding of the public’s ...
Opinion & Analysis
5 months ago

'Resignation is not an option, we’ve got to get the job done,' National Prosecuting Authority boss Shamila Batohi said on Monday.
News
6 months ago