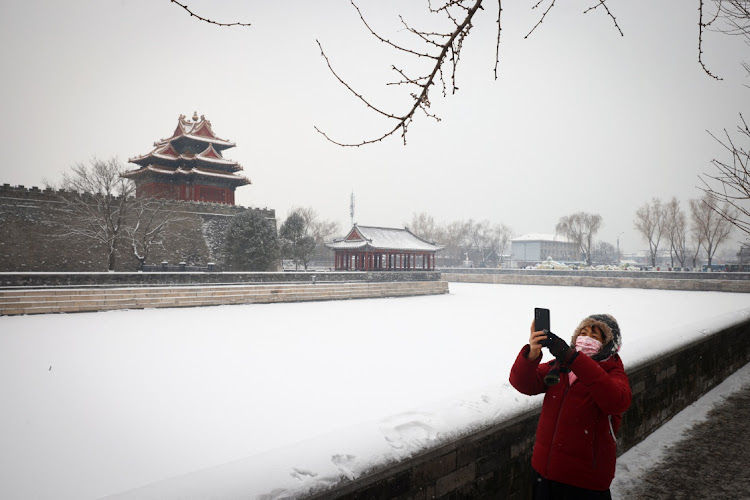 A woman takes pictures of the Forbidden City after an overnight snowfall as the spread of the coronavirus disease (Covid-19) continues, in Beijing, China, January 22, 2022.
Image: REUTERS/Thomas Peter

The total number of Covid deaths rose to 94,063 after 13 deaths were recorded.

Face masks can make you look more attractive, according to a new study from Cardiff University.

Hong Kong reported 25 confirmed local Covid infections on Saturday, the most since at least March, and 100 preliminary positive cases as officials try to contain an outbreak at a public housing estate.

Most of the preliminary positive cases were found at the public housing complex in the New Territories where more than 2,500 residents have been locked down for five days and are tested every day. Two employees at a local public hospital and one worker at a care center also tested preliminary positive.

The government urged all Hong Kong residents to stay at home and avoid gatherings. The city is battling new waves of infections from both the omicron and delta variants of the virus, with daily case counts rising, three weeks after it last reported zero.

The outbreak in the housing estate and traces of the virus found in sewage has led to mass testing at dozens of apartment blocks, involving thousands of people.

Poland reported a record 40,876 new daily Covid-19 infections on Saturday, the health ministry said, as the Omicron variant takes hold across the country.

Authorities have said the latest wave of the pandemic will drive case numbers to levels not yet seen in Poland, with estimates of the peak ranging from 60,000 to as many as 140,000 daily infections.

Medicine deliveries the future after Covid-19 proves their worth: UCT researchers

When Covid-19 hit SA and stigmatisation was at its peak, many healthcare workers were shunned in their communities due to fear of the virus.

So when two Cape Town clinics started doing home visits to patients with non-communicable diseases (NCDs) — those most at risk of Covid-19 complications — some  were reluctant to take part.

But thanks to healthcare workers’ perseverance, the crisis-management strategies they introduced to accommodate these patients has paid off.

According to a new study by the University of Cape Town (UCT), managing stable NCD patients at home rather than at clinics, is the future and should be retained even after pandemic.

Medicine deliveries the future after Covid-19 proves their worth: UCT researchers

Tokyo recorded its highest number of daily Covid-19 infections for the fourth consecutive day on Saturday as the Omicron variant continued to spread rapidly.

The capital city had 11,227 new coronavirus cases, the local government said a day after reinstatement of curbs that are set to run until February 13.

The Beijing Winter Olympics torch relay will be cordoned off from the public because of concern about the spread of the coronavirus, organizers said.

The World Health Organization has recommended extending the use of a reduced dosage of the Pfizer/BioNTech Covid-19 vaccine to children aged 5 to 11 years old.

Data shows Covid-19 may be retreating in the US

New Covid-19 cases are falling in parts of the United States hardest hit by the fast-spreading Omicron variant, according to a Reuters analysis of public-health data, offering an early indication the virus might once again be on retreat.

Three U.S. studies show that a third dose of an mRNA vaccine is key to fighting the Omicron coronavirus variant, providing 90% protection against hospitalization due to Covid-19, the US Centers for Disease Control and Prevention Director Dr. Rochelle Walensky said in a speech on Friday.