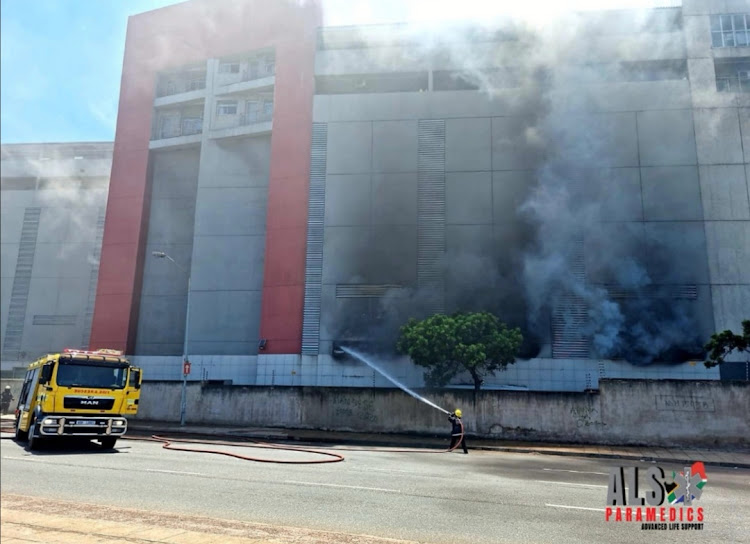 Residents of Durban have been warned of “possible harmful smoke” from a fire which started at the China Emporium in the city centre on Friday.
Image: ALS Paramedics

Residents of Durban have been warned of “possible harmful smoke” from a fire which started in the city centre on Friday.

The blaze at the China Emporium on Dr Pixley kaSeme (formerly West) Street was still burning, and firefighting operations were still under way to prevent it spreading to neighbouring buildings, the eThekwini municipality said in a statement on Sunday.

The city said that it's environmental health department wanted to warn residents about “fumes” coming from the building.

“Operations to control the fire from spreading to adjacent buildings is under way and the city’s fire and emergency services remain on site to extinguish smouldering debris in the affected building.

“With smoke still emanating from the building, the public is urged to take precautions when in the area. Areas affected may vary depending on wind direction, and currently include Durban Central, Berea, Musgrave, Congela, Glenwood, Wilsons Wharf and Maydon Wharf.

Durban firefighters were still tackling a blaze at the China Emporium in the city centre on Saturday.
News
5 months ago

At least 13 people sustained minor to moderate injuries after a fire broke out at the China Emporium on the corner of Anton Lembede and Brook streets ...
News
5 months ago

At least four people are trapped in a building in central Durban which caught alight on Friday.
News
5 months ago