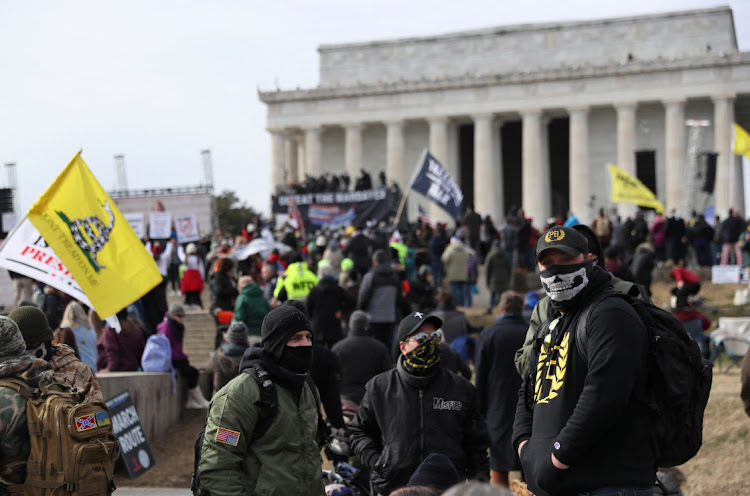 A group of people, some of whom dressed in colors and symbols associated with the group Proud Boys, which has been connected to the white supremacist ideology, take part in a rally in opposition to mandates related to the coronavirus disease (COVID-19) at the Lincoln Memorial on the National Mall in Washington, D.C., U.S., January 23, 2022.
Image: REUTERS/Leah Millis

SA recorded 1,332 new Covid-19 cases in the past 24 hours, the National Institute for Communicable Diseases (NICD) said on Monday.

The new cases came at a positivity rate — the number of positive results against the number of tests done in the same period — of 7.8%.

The NICD also reported that, based on health department data, there were 88 Covid-19 related deaths reported in the past day. However, with many of these reports being as a result of clearing backlogs, just 14 of the deaths occurred in the past 24 to 48 hours.

The older brother to Mamelodi Sundowns co-coach Steve Komphela died at the EmoyaMed private hospital in Bloemfontein shortly before 4pm.

Family spokesperson Mangaliso Alexander Xaba said Khompela had been admitted to hospital more than a month ago for Covid-19 related treatment.

The Comoros will have to use one of their outfield players in goal against Africa Cup of Nations (Afcon) hosts Cameroon on Monday after being hit by Covid-19 infections.

The Comoros Football Federation reported 12 cases in their camp on Saturday, including their only two fit goalkeepers, and coach Amir Abdou said they would go into the last-16 tie in Yaounde with a makeshift goalkeeper.

Medical and scientific bodies have called for the Commission for Gender Equality (CGE) to withdraw its warning against imposing mandatory Covid-19 vaccinations on female workers and students, saying such an influential body could “unknowingly or otherwise” fuel anti-vaccination sentiment.

On January 16 the CGE i said it noted a new study published in the Obstetrics & Gynaecology medical journal that suggests vaccines may cause a small change to the menstrual cycle length, but this change is temporary.

The World Health Organisation (WHO) has recommended two new drugs to treat patients with Covid-19, one for patients with critical disease and another for non-severe cases.

The two newly recommended drugs — baricitinib and sotrovimab — form part of the eighth update of WHO’s living guidelines on therapeutics and Covid-19, and are based on evidence from seven trials involving more than 4,000 patients with non-severe, severe and critical Covid-19.

Australia recorded another surge of COVID-19 deaths on Monday as an outbreak of the highly contagious Omicron variant peaked, and authorities warned numbers could rise further when schools return from end-of-year holidays next week.

The world No. 13 economy is trying to strike a balance between reopening after two years of movement restrictions and coping with the highest numbers of deaths and cases of the pandemic.

Authorities say a rollout of a vaccine booster will reduce deaths, and point to a stabilisation in hospitalisation numbers as a sign the flare-up has reached its worst.The country on Monday reported 56 deaths, most of them in its three most populous states - New South Wales, Victoria and Queensland - slightly down from the previous day's count of 58 but still among the highest of the pandemic.

The total number of new cases, 37,754, was well below peaks three times that amount earlier this month, although four other states and territories were yet to report figures.

"Our assessment indicates that the spread of COVID virus is slowing, our situation is stabilising and while we expect to see an uptick in transmissions associated with schools going back this could be mitigated by the actions of you as individuals," NSW Chief Health Officer Kerry Chant told a news conference."

Getting those boosters will help us," she added.More than nine in 10 Australians aged over 12 have had two doses of coronavirus vaccine - a statistic health experts say has kept the country's death rate relatively low - but far fewer have had a third dose which is seen as a guard against Omicron.

Though all Australian states are resisting a return to lockdown, most have reintroduced social distancing measures and mandatory mask-wearing to slow transmission. But they are divided on whether and how to manage a return to school after lengthy periods of remote learning.

.Students in NSW and Victoria will have to wear masks and receive regular rapid antigen tests when they return to in-person classes next week. Queensland however postponed the return to school to Feb. 7 to avoid a spike in transmission."The peak does not mean the end," Queensland Chief Health Officer John Gerrard said, warning of a "possible extension of the peak" when schools return.