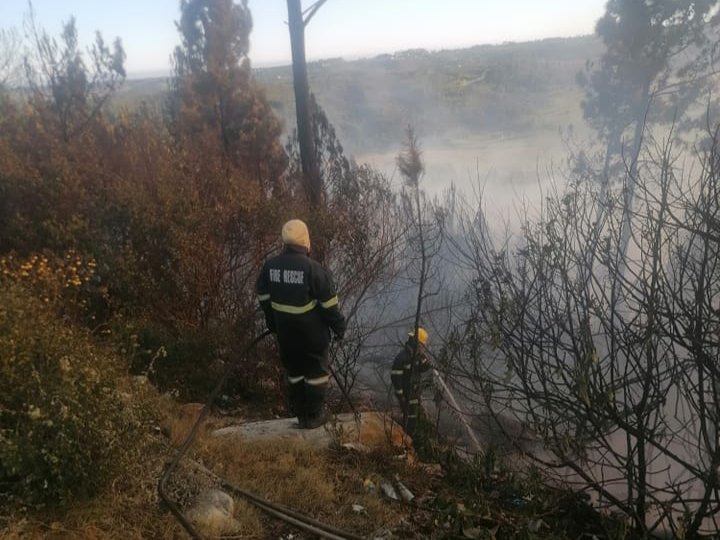 Throughout the afternoon on Sunday, two bomber planes and a helicopter water-bombed the fire in Plettenberg Bay.
Image: VUYOLWETHU VICE

There have been no lives lost or damage to infrastructure recorded as firefighters continue to battle a fire in Plettenberg Bay.

The fire, which started behind Kwanokuthula Phase 3 at midday on Sunday, has seen a collaborative effort from the Garden Route district municipality, CapeNature, Working on Fire, Southern Cape Fire Protection Association Garden Route (SCFPA) and landowners, who worked into the early hours of the morning.

Throughout the afternoon on Sunday, two bomber planes and a helicopter were activated by the Western Cape government to water bomb the area.

“Crews from Garden Route district municipality did well throughout the night to prevent the fire from spreading to three gorges closest to structures,” he said.

“A reconnaissance flight was conducted at first light and high-priority areas were identified that require a renewed approach to upscale operations.

“An hour of aerial wildfire suppression will be implemented to assist ground teams. This will aid firefighters in protecting infrastructure and suppressing areas stretching from west to east.”

Fire at Waterkloof Air Force base being investigated

The blaze started at about 7pm on Sunday and was put out within an hour.
News
5 months ago

Firefighters on high alert as winelands blaze 'burns out of control'

Firefighters are busy fighting a fire that was started by lightning on Saturday afternoon in Agter-Vinkrivier in the Robertson Valley in the Western ...
News
5 months ago

Durban firefighters were still tackling a blaze at the China Emporium in the city centre on Saturday.
News
5 months ago