‘There are no issues between them,’ said the Jacob Zuma Foundation 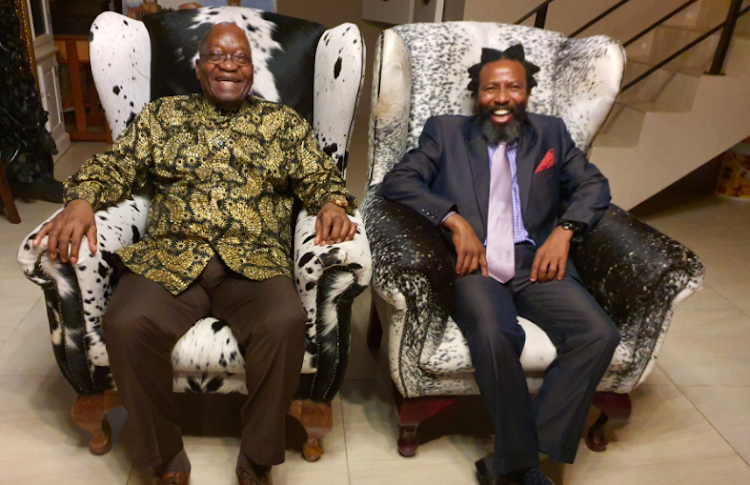 Former president Jacob Zuma and AbaThembu King Buyelekhaya Dalindyebo have seemingly buried the hatchet and made peace following their meeting in Nkandla.

Zuma welcomed Dalindyebo to his homestead to “break bread” over the weekend.

The purpose of the king’s visit was to check in on the former president after his release from prison on medical parole.

According to the Jacob Zuma Foundation, Dalindyebo expressed his disappointment over the judiciary’s alleged ill-treatment of Zuma.

The king also placed on record that there were “no issues” between them.

“He pledged his full support for [former] president JZ now and in future. They both reminisced about their exile days,” said the foundation.

The AbaThembu King visited H.E Prez Zuma.
*He placed on record that there are no issues between them.
*He expressed disappointment about the ill-treatment of Prez JZ by the Judiciary
*He pledged his full support for Prez JZ now&future
*They both reminisced about their exile days pic.twitter.com/6uSdGvja8C

The news about Dalindyebo’s visit to Zuma was made public by UDM leader Bantu Holomisa on New Year’s Day.

In a tweet, Holomisa told Zuma's daughter, Duduzile Zuma-Sambudla, Dalindyebo was keen to visit her father.

Holomisa was reacting to Zuma-Sambudla’s post about how 2022 was going to be a significant year as she turns 40 and her father turns 80.

“Uzukungiphe lembiza uyiselayo Nxamalala [Please share the fountain you drink out of]. Happy New Year to you and your family.

“Emgidini wakwa Dali Mpofu [At Dali Mpofu’s ceremony] the King of the Thembus, Buyelekhaya Dalindyebo, ordered Dali, Manyi and myself to organise a visit to your home. Dali Mpofu and Mzwanele Manyi, siyeza [we are coming],” said Holomisa.

During Zuma’s nine-year presidency, he and Dalindyebo had a shaky relationship, with the king at one point implying Zuma had no respect for kings and ministers.

AbaThembu King Buyelekhaya Dalindyebo is to pay Jacob Zuma a visit on Saturday at his Nkandla homestead.
Politics
5 months ago

Zuma says while earlier he sought Zondo’s recusal as state capture inquiry chair, now he wants to challenge his position
News
5 months ago

A video of tourism minister Lindiwe Sisulu praising SA’s constitution has resurfaced and is making waves on social media.
Politics
5 months ago