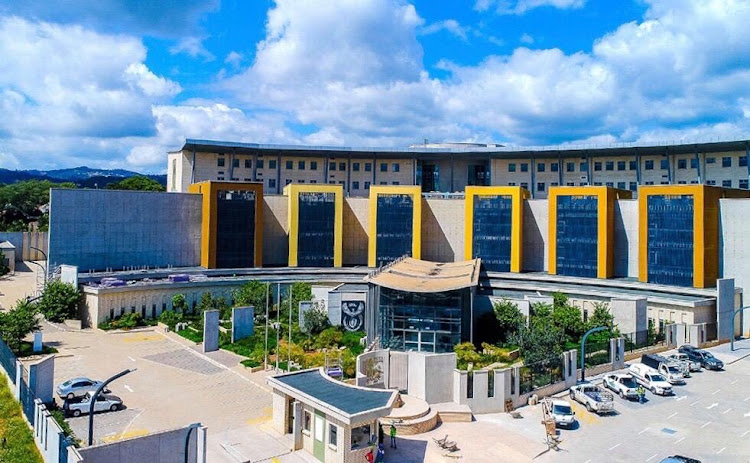 The Mpumalanga High Court was opened in 2019 with 12 courtrooms - six for civil cases and six for criminal matters.
Image: PresidencyZA via Twitter

This is what MPs from the parliamentary portfolio committee on justice and correctional services encountered on Monday during oversight visits to the Mpumalanga High Court and a provincial sexual offences court.

At the high court, the committee said it heard the infrastructure, which was opened in 2019 is falling apart. There are reports of roof leaks, broken security cameras, an out-of-service biometric system and falling bookshelves in the library.

“It is important that once we have built something, we look after it and make sure it is properly maintained for future generations,” said committee chairperson Bulelani Magwanishe.

Security cameras and the biometric system at the high court were a security risk that exposed judges, staff and the public to risk.

The committee said it was particularly concerned that security cameras and the biometric system were a security risk that exposed judges, staff and the public to risk.

“This should be given urgent attention.”

Last week a fire alarm went off after gas suppression cylinders exploded. The committee heard they had not been serviced since 2019.

As a result of the space problem, the sexual offences court, which operates from the Mbombela regional court premises, sometimes struggles to protect survivors from coming into contact with suspects.

“Some examples are to access the toilets, survivors have to pass through the waiting area where suspects who are out on bail are sitting.

“Court officials told the committee it was difficult to operate a court in most court buildings throughout the province due to poor maintenance and old heritage buildings that cannot be modernised.

The city of Tshwane has condemned a burglary that took place at the Gazankulu clinic in Saulsville on Friday.
News
4 months ago

“Challenges include leaking roofs, dysfunctional air-conditioners and fire extinguishers, water shortages, telephone lines out of order for months and broken court recording transcription machines. These challenges lead to the postponement of cases, adding to the backlog.”

On Tuesday the committee will visit the Barberton Correctional Centre and Barberton Community Corrections facility to assess their rehabilitation, skills development and integration programmes.

The man accused of torching parliament on January 2 will have to wait another week for his much-anticipated bail hearing.
News
4 months ago

Paul Makaula appeared in the Hillbrow magistrate’s court on Friday for allegedly breaking windows at the Constitutional Court in Johannesburg with a ...
News
4 months ago

Acting chief justice Raymond Zondo has voiced "grave concern" over the hammer attack at the country's apex court and says the security of the ...
News
4 months ago