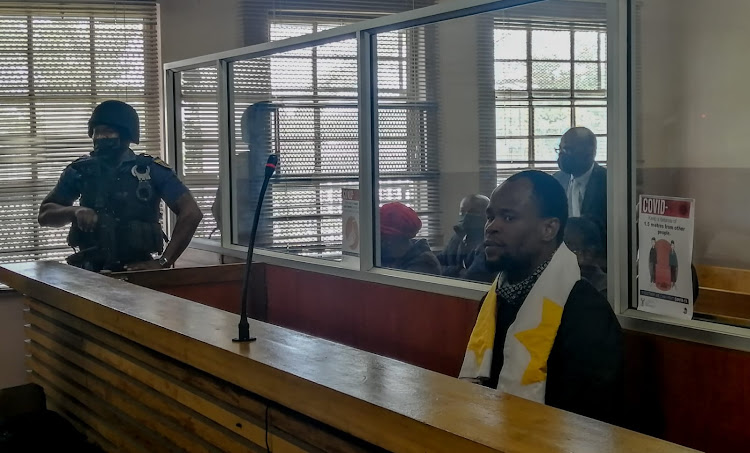 Hitman Fisokuhle Ntuli has been sentenced to six life terms and 39 years' imprisonment after being found guilty of six murders.
Image: Orrin Singh

A notorious 32-year-old KwaZulu-Natal hitman, who has been implicated in the murder of former Bafana Bafana captain Senzo Meyiwa, was sentenced to six life terms and 39 years on Tuesday.

National Prosecuting Authority (NPA) spokesperson Natasha Kara said Ntuli’s sentence relates to the murders he committed in the Nongoma area from 2015 to 2018.

“Representing the state, the deputy director of public prosecutions, advocate Cyril Selepe, led the evidence of eyewitnesses as well as ballistics and the testimonies of police  officials. Selepe also handed in victim impact statements facilitated by court preparation officer Ntombi Chonco and compiled by members of the victims’ families,” said Kara.

“All the statements alluded to the horrific and violent manner in which the victims were killed, with the family members saying Ntuli had no right to take the lives of their loved ones.”

Kara said the magistrate suggested Ntuli only be considered for parole after serving 25 years in prison.

Convicted murderer Muzikayise Malephane testified that Ntuthuko Shoba first offered him R7,000 before agreeing to pay R70,000 for the murder.
News
5 months ago

TimesLIVE reported last year how Ntuli, who was arrested by the task team investigating political killings in the province, was found guilty of the 2016 murder of ANC councillor Thami Nyembe, who was gunned down in Nongoma. Nyembe’s wife sustained serious injuries during the shooting but survived.

According to the charge sheet, Ntuli’s reign of terror in Nongoma began in April 2015, when he murdered Bhutiza Mahlobo.

The next year he gunned down Nyembe. His wife, Nolwazi Mngomezulu, was shot and critically injured but survived.

Next Ntuli killed three brothers who were willing to testify as witnesses in the murder of Nyembe. Brothers Sibusiso Phiwayinkosi, Mcebisi and Sibusiso Elvis Zulu were killed by Ntuli in January 2017.

His last hit before his arrest was Spamandla Zungu, who Ntuli murdered in August 2018.

According to national police spokesperson Brig Vishnu Naidoo, Ntuli is among the accused in the Meyiwa murder case.

“He is charged separately in the matter of Senzo Meyiwa. He is accused number five in that matter.”

The bail application of a North West woman accused of wiping out her family in an alleged hit has been postponed to Friday due to water cuts at the ...
News
5 months ago

This year has seen courts hand down a number of heavy sentences for a variety of convictions.However, the one that stood out was that of Nomia ...
News
5 months ago

A pastor, his wife and a hitman, convicted of brutally murdering a young woman to pocket a multimillion-rand insurance payout, were given hefty ...
News
7 months ago

Safety of nine witnesses in Senzo Meyiwa trial will be protected: state

The trial of the five men accused of the murder of football star Senzo Meyiwa will begin from April 11 next year in the high court in Pretoria.
News
8 months ago