LISTEN | Shoba was scared of me, so he would have paid for Pule's murder, says killer 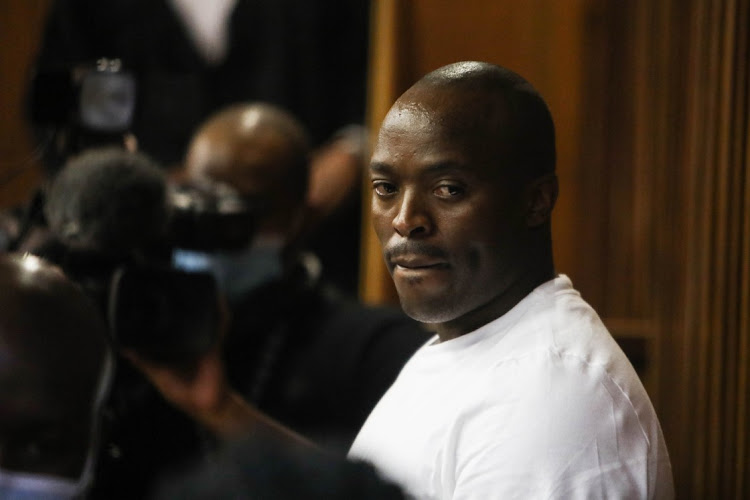 Though convicted killer Muzikayise Malephane walked away without a cent after killing pregnant Soweto woman Tshegofatso Pule, he said he had been confident that the alleged mastermind behind the plot, Ntuthuko Shoba, would have paid him.

Malephane made this brazen statement on Wednesday when he took to the stand to testify in Shoba’s trial.

He confessed to shooting Pule and then hanging her lifeless body, alleging this was after receiving hit instructions from Shoba. He is serving a 20-year jail term for the murder.

Shoba is charged with murdering or conspiring to murder Pule as well as defeating the ends of justice. He has pleaded not guilty.

“I was going to get money from him [for helping him kill her]. He was going to give me money because, first, I would have blackmailed him. But he would have given me cash because he is scared or afraid of me, I know,” said Malephane.

Malephane alleged Shoba had approached him in 2020, saying he needed help in eliminating Pule — who was his pregnant on-again, off-again girlfriend.

“He knows that such favours are sensitive and somehow he has to shut my mouth. I didn’t have to tell him or ask him. He knew [that he had to pay me],” said Malephane.

After negotiations about a price, the two eventually agreed on R70,000 but Shoba’s phone was suddenly off days later, he said.

Nine days later, Malephane was arrested and he explained how he later learnt that CCTV footage was shared with the police by Shoba.

The footage had shown Pule getting into Malephane’s silver-grey Jeep — a car which Pule at the time believed to be an Uber.

Malephane admitted to the court that he was angered by Shoba’s betrayal and said voice notes recorded by him from prison, where he is heard threatening Shoba, were authentic. He, however, said he simply said all that to scare Shoba.

Muzikayise Malephane, the man who killed heavily pregnant Tshegofatso Pule in June 2020 and hanged her body from a tree, has shared more details ...
News
4 months ago

Shoba’s lawyer, Norman Makhubela, asked Malephane about another video clip that was recorded by journalists after his sentencing in February last year.

In the clip, Malephane was heard saying that Pule’s family should get to Shoba before he does.

Asked to elaborate on what he meant on this, Malephane said: “The reason I said that is because Shoba has put me in so many problems — too many — and he does not have the guts to take responsibility for what he has done.

Makhubela said this statement made it seem like it took “very little to provoke you to violence”.

“This is not something small. What he has done, I don’t have an explanation for it,” Malephane added.

He said he blamed Shoba for him languishing in jail.

“If it wasn’t for Shoba, I would not be sitting here today,” said Malephane.

Makhubela pressed Malephane on the threats he made to Shoba from behind bars.

“While in prison, you posted a threat on social media that you had arranged 26 or 28 gang members to [have sex with him] for what he has done to you?” asked Makhubela.

“It’s true there was a leak of a voice note on social media but what had happened was that I was talking to my friends on a group chat and one of my friends leaked it,” said Malephane, revealing how he had access to a cellphone in prison.

“So you were threatening him with sexual violence in the voice note?” Makhubela added.

“To be honest, it was all just talk. I had not arranged such yet,” he added.

The friendship of the two men was also cast into the spotlight on Wednesday when Malephane conceded that they were acquaintances who got along well when they met at drinking spots.

Malephane said despite them not being too close, the pair always clicked and “had a bond”.

Convicted murderer Muzikayise Malephane testified that Ntuthuko Shoba first offered him R7,000 before agreeing to pay R70,000 for the murder.
News
4 months ago

Murder-accused Ntuthuko Shoba told the family of Tshegofatso Pule the last time he had seen her, she had left his place annoyed after he had ...
News
4 months ago

Alleged co-conspirator gives court a graphic account of the build-up to the murder, which ‘was meant to look like a suicide’
News
4 months ago