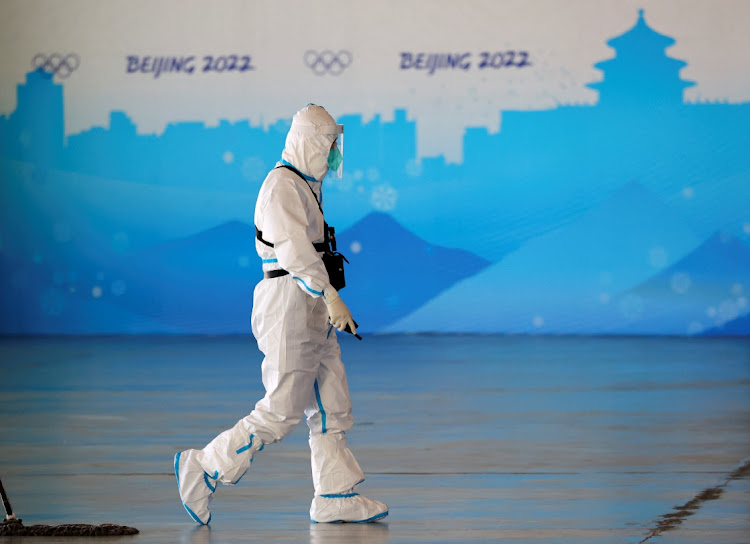 A Red Cross ambulance paramedic wears a protective suit as a protection from the coronavirus disease (Covid-19) at the Main Press Centre ahead of the Beijing 2022 Winter Olympics in Beijing, China January 27, 2022.
Image: REUTERS/Fabrizio Bensch

There were 160 Covid-19 related deaths recorded in the past 24 hours, the National Institute for Communicable Diseases (NICD) said on Thursday.

But, based on the health department's data as it cleared a backlog of historic mortality cases, the NICD said 34 of the deaths occurred in the past 24 to 48 hours.

The number of new Covid-19 infections in Germany exceeded 200,000 in a day for the first time on Thursday, hitting staffing at companies including Lufthansa Cargo.

The Robert Koch Institute for infectious diseases reported 203,136 positive tests in the last 24 hours, 69,600 cases more than the same day a week ago.

Uwe Janssens, a board member of the DIVI association of emergency and intensive care doctors, told Reuters that hospitals were not currently overloaded, but that could change in coming weeks.

He warned that if the number of daily infections rises above 300,000 then there could be problems for Germany's critical infrastructure.

Airline group Lufthansa's cargo arm said a staffing crunch at its hub in Frankfurt meant it was currently unable to handle sorting of loose freight from the United States, Canada and Europe."

Despite comprehensive preventative measures, we are now clearly feeling the rising infection numbers," Lufthansa Cargo told Reuters on Thursday, adding that up to 15% of cargo at Frankfurt was affected by delays.

It said its flight schedule was unaffected, as was transportation of time-sensitive goods such as organs for transplants or temperature-controlled cargo.

Rival DHL said its operations in Frankfurt and Leipzig were still running smoothly.

The German Hospitals Federation had warned earlier this week that three-quarters of hospitals were reporting higher than usual numbers of staff out on sick leave.

German lawmakers debated on Wednesday whether to impose compulsory Covid-19 shots, while protesters gathered outside the parliament building.

Chancellor Olaf Scholz backs compulsory vaccines for over-18s but his coalition government is divided on the issue and he has told lawmakers to vote according to their conscience.

Many lawmakers, including some from the coalition's junior partner, the liberal Free Democrats, oppose mandatory vaccines, arguing this violates the second article of Germany's constitution that guarantees citizens control over their own bodies.

Poland reported a record 57,659 new daily COVID-19 infections on Thursday, the health ministry said, as the Omicron variant takes hold.Authorities have said the latest wave will drive case numbers to levels not yet seen in Poland, with estimates of the peak ranging from 60,000 to as many as 140,000 daily infections.

Parts of Beijing curb movements to fight Covid ahead of Olympics

Beijing has limited the movement of people in more parts of the city, even as it reported fewer Covid-19 cases on Thursday, to lower virus risks just over a week before the Winter Olympic Games begin in the Chinese capital.

Beijing's Fengtai district said late on Wednesday residents in more areas should not leave their residential compounds for unnecessary reasons and must have a daily Covid test.

The district, which has reported more local virus cases than others in the current outbreak in Beijing, had already locked down some compounds that house tens of thousands of people. Several other city districts have imposed mobility restrictions in certain areas.

Although case numbers are low compared to outbreaks globally, China's practice is to immediately contain any outbreak. Containment of the coronavirus takes on added urgency as the Olympics approach and as hundreds of millions of people are expected to travel during the Lunar New Year season.

"I'm anxious everyday because the virus situation is still quite serious," said a traveler surnamed Wang at Beijing Railway Station.

"I don't want to bring trouble to my hometown. Now I'm tested negative, but what if it changes to positive?"

Travel in the first ten days of the holiday season across China increased 46% from the same period last year, but it is still below the pre-pandemic levels of 2019, a national transportation authority official said on Thursday.

Beijing Olympics organisers said 23 new cases of Covid-19 were detected among Games-related personnel on January 26, including eight among those already in the closed-loop Olympics bubble and the rest on arrival at the airport.

In Shanghai, a locally transmitted case of the Omicron variant was detected on Monday, state television said on Thursday.

The capital has found a total of 60 local cases with symptoms since January 15, NHC data shows.

Beijing officials have said most cases are the Delta variant, with a handful being the highly transmissible Omicron.

At least eight provinces, regions and municipalities in China have found locally transmitted Omicron infections, but totals for cases of the variant are unclear.

Since the pandemic began, China has shut its borders to most international arrivals. Overseas arrivals typically must quarantine for at least two weeks when they enter China.

Immigration officials said on Thursday trips by foreigners in and out of China fell 65.9% in 2021 compared to the previous year.

Malaysia’s new coronavirus cases rose to the highest level in more than a month as the highly contagious omicron variant starts to spread in the Southeast Asian nation.

The nation reported 5,439 new infections on Thursday, the most since Dec. 9, data from the health ministry show.

The increase comes a day after Health Minister Khairy Jamaluddin said that daily cases could rise, though the nation’s high vaccination rate would help keep the outbreak in control. The healthcare system is prepared for the omicron wave and the number of serious cases are on the decline, he added.

While Malaysia is grappling with community transmission of omicron, the bulk of the 601 cases of the variant detected so far are imported, official data show. The jump in infections hasn’t led to an increase in hospitalizations or admissions to intensive care units -- the key metrics the health ministry will use to decide the nation’s move to the endemic phase of the outbreak.

The country’s total bed and ICU usage at public hospitals, including for non-Covid cases, was at 67% on Wednesday. The proportion for ICU utilization by Covid patients stood at about 15%, the data show.

Nearly 80% of the nation’s total population has been fully vaccinated, and about 48% of adults have received booster shots as of Wednesday. The country is set to begin inoculating children as young as five years next month.

An estimated 4 million children aged 5 to 12 years are eligible to receive the vaccine, and as of Thursday, 484,639 children have signed up for the jab, Deputy Health Minister Azmi Ghazali said in a statement.

Hand dryers alone are ineffective in killing Covid-19, while using alcohol-based hand sanitisers and washing your hands with soap and water have proven to help protect against Covid-19.

This is according to the World Health Organisation (WHO), which said temperatures on a person’s skin or surface have no effect on the virus.

“Hand dryers are not effective in killing the Covid-19 virus. To protect yourself, frequently clean your hands with an alcohol-based hand rub or wash them with soap and water. Once your hands are cleaned, you should dry them thoroughly by using paper towels or a warm air dryer,” said the organisation.

SA could be missing malaria cases as symptoms look like Covid-19: NICD

Despite SA entering its peak malaria season, many malaria cases are being misdiagnosed as Covid-19, the National Institute for Communicable Diseases (NICD) warned this week.

The organisation said that any individual presenting with fever or flu-like illness — if they reside in a malaria-risk area in Limpopo, KwaZulu-Natal or Mpumalanga — or have travelled to a malaria-risk area, especially Mozambique, in the past six weeks, must be tested for malaria.

SA could be missing malaria cases as symptoms look like Covid-19: NICD

Unmasked: How officials and firms used Covid as a get-rich-quick scheme

The devastating Covid-19 pandemic was used as a get-rich-quick scheme by some government officials and business owners.

Instead of providing relief in the face of a virus — which up to Tuesday night had killed a confirmed 94,397 people in SA alone — these unscrupulous individuals “cynically exploited a public health crisis for personal gain”.

So said the Special Investigating Unit as it released the outcome of its probe into procurement associated with the coronavirus pandemic across all spheres of government.

The SIU report, released on Tuesday, detailed how contracts were awarded to prominent and influential individuals, as well as relatives of politicians and senior officials, without following supply chain management rules and regulations.

Unmasked: How officials and firms used Covid as a get-rich-quick scheme

Predicting how Covid-19 will behave next remains notoriously hard. Predicting how humans will react is much easier, since history can be a guide.

One of the most prescient articles written about the pandemic’s future was Gina Kolata’s May 2020 New York Times piece How Pandemics End, with historians of medicine describing society’s reactions to Ebola, bubonic plague and the 1918 flu pandemic. There’s a biological end to a pandemic, when cases and death rates fall, and a social end, when people get tired of being afraid, accept a certain amount of risk and resume social and commercial life. The social end sometimes comes first.

After two years of living with Covid, it’s not surprising that many folks are far less fearful of the virus and are eager to go back to a more normal existence. People want a word to describe the better future we envision. In 2020, we talked about herd immunity. In 2022, we say “endemic” instead.