‘That was Christmas!’ — Mafe’s alleged reaction to parliament fire video

Zandile Christmas Mafe, the man accused of torching parliament, allegedly slapped his chest and said “That was Christmas!” when he was shown a video of the fire after his arrest.

This was alleged by the proecution when it cross-examined Mafe on Saturday during his bail application at the Cape Town regional court. The state said he bought petrol for R10 from Bellville and took it to parliament in a cooldrink bottle.

The prosecution put it to the 49-year-old Khayelitsha man that video footage shows him being arrested as he climbs out of parliament through a window carrying a kettle, cutlery, shoes and stationery.

In footage from inside the building, said the state, “the person wearing clothes that looked exactly the same as the clothes you were wearing when you were arrested is seen setting fire in parliament, using paper and boxes dabbed in petrol and dropping it into the National Assembly.

“The person was walking around with petrol in a Coke bottle and piled office chairs in front of offices. The person tore curtains for kindling for the fire.” 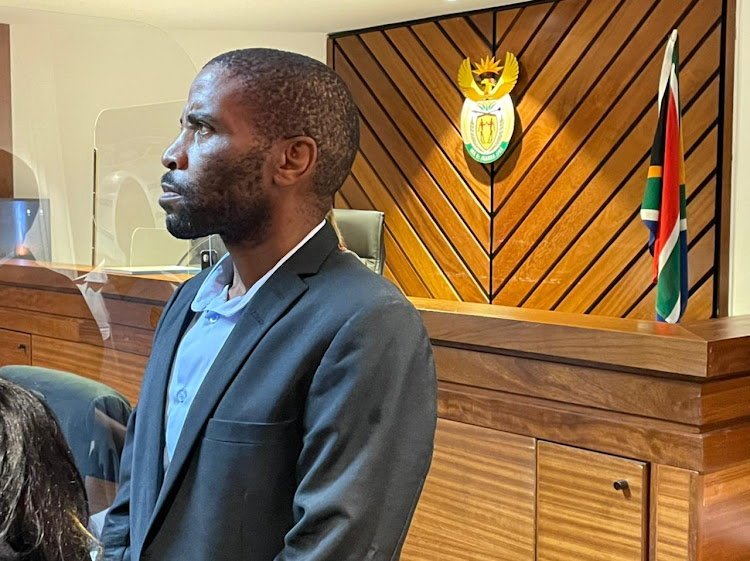 “I am not guilty but I do accept that those are serious charges,” said Zandile Mafe while testifying during his bail application.#ZandileMafe @TimesLIVE pic.twitter.com/JQTZ8vrrE8

The prosecution said Mafe admitted to the investigating officer after his arrest on the morning of January 2, when the fire was detected at 6am, that he had started the fire in support of three demands:

🔥🔥During Zandile Mafe’s cross examination, Mafe said he was ‘friends’ with Eugene Terblanche and wanted the state to release Janusz Walus (the man who assassinated Chris Hani). #ZandileMafe - This is during his bail hearing. pic.twitter.com/2yio3HY2aP

Reading a statement by the investigating officer, a Col Theron, the prosecution said Mafe told him he started the fire so Ramaphosa would be unable to deliver what he termed a “State of Nonsense” address in February.

It was “the right thing to put the parliament on fire as at the moment it is not helping the people of SA. The people in charge don’t care as it belongs to tycoons who want to enrich themselves”, Theron's statement quoted Mafe as saying.

Mafe repeatedly said “No comment” to the allegations in Theron's statement.

The man accused of torching parliament says he was threatened with the death sentence after being arrested for arson on January 2.
News
6 months ago

In his own affidavit, he said after his arrest he was “severely and violently manhandled and intimidated” by the police and taken to Cape Town police station.

“A few hours later, I was booked out by an unknown man and taken to an unknown place,” Mafe said in his affidavit.

“At the place, an unknown white man told me that I would be sentenced to death for burning parliament unless I co-operated with them.

“I was terrified and as a result I promised to 'co-operate' with whatever they may require of me. However, this turned out to be an empty promise from the white man as I was not released and I am still in police custody almost two weeks later.”

Zandile Mafe testifies before the Cape Town Regional Court and explains his reasons for going on a hunger strike.#ZandileMafe #Parliamentfire @TimesLIVE pic.twitter.com/GUvReZ3qE9

Earlier on Saturday, Mafe said if he is granted bail he will “stay at home and watch my DStv”. But he said this would be possible only if he received financial support, since he is penniless.

“The only thing I will need is food and if the {the government} can also sponsor me with grant money that will assist me very much and that will stop me from coming to Cape Town,” Mafe testified.

The arson and terrorism accused was brought to court from Pollsmoor Prison in Tokai, where he has been held for most of the time since he was arrested.

VIDEO: Prosecution says police found placards at Zandile Mafe’s Khayelitsha home which stated “Ramaphosa is a serial killer”. Here Mafe explains that he is not surprised they found these placards at his house. #ZandileMafe @TimesLIVE pic.twitter.com/Rl4MvyiWGV

He spent a few days in Valkenberg Psychiatric Hospital, where a magistrate sent him for 30 days' observation after a state physician diagnosed him with paranoid schizophrenia.

The committal was overturned on review by Western Cape judge president John Hlophe, who said Mafe must be returned to Pollsmoor immediately.

Zandile Mafe claims that if he is released on bail he will receive support from the FF+ and their leaders in the North West. @TimesLIVE #Parliamentfire

In his testimony on Saturday, Mafe said he sometimes slept on the streets of Cape Town — where he went to find casual work —  to avoid the expense of travelling back to his home in Khayelitsha, where “I have my fridge, my queen bed, my DStv”.

He added: “As a poor man and being unemployed, I have to sleep anywhere, like the people who sleep at the city hall, just to cover my head.

“After three or four days I have to go back to my place in Khayelitsha ... so that the people don’t see I am not always there, so that my stuff cannot be stolen.”

If he was granted bail, he said, he would return to his home. “The state has nothing to fear that I won’t come back to court because I mentioned that I will sue the state and that my address is in Khayelitsha and in Mafikeng,” he said.

“I am not guilty but I do accept that those are serious charges,” said Zandile Mafe while testifying during his bail application.#ZandileMafe @TimesLIVE pic.twitter.com/JQTZ8vrrE8

“Since I am known all over, it will be easy for me to be arrested. If the government can assist me I will just stay at home and watch my DStv.”

Mafe said he accepted he faced serious charges but confirmed he would plead not guilty. He also denied he was mentally disturbed.

EFF leader Julius Malema has weighed in on the parliament fire and defended alleged arsonist Zandile Mafe.
Politics
6 months ago

The man accused of torching parliament on January 2 will have to wait another week for his much-anticipated bail hearing.
News
6 months ago

Did judge president John Hlophe make the right call. or is he "using the bench to fight factional wars"?
News
6 months ago