For his role in bringing Denel to its knees, charged Zondo, Daniel Mantsha’s fitness to continue practising as a lawyer must be looked into — especially since he is a repeat offender 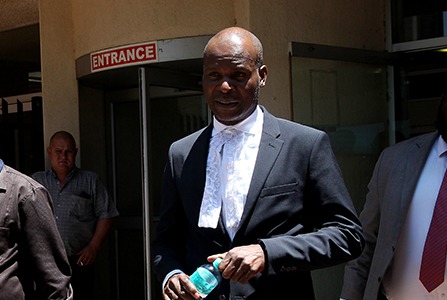 It was 'beyond unbelievable' that Jacob Zuma’s former attorney, Daniel Mantsha, was appointed as Denel board chair despite a string of misdemeanours that had him disbarred as a lawyer for years, says acting chief justice Raymond Zondo. File photo.
Image: Sandile Ndlovu

It is beyond unbelievable that former president Jacob Zuma’s former attorney Daniel Mantsha was appointed as Denel board chair despite a string of misdemeanours that had him disbarred.

This is according to acting chief justice Raymond Zondo in Part 2 of the state capture inquiry report released this week.

Zondo said that this was perhaps confirmation that Mantsha was an appointee of the Gupta family, for whom he carried out their mandate to ransack the state-owned arms manufacturer.

Accordingly, for his role in bringing Denel to its knees, charged Zondo, Mantsha’s fitness to continue practising as a lawyer must be looked into — especially since he is a repeat offender.

Mantsha was disbarred as a lawyer in 2007 after many transgressions, most of which included financial misconduct.

Shockingly, he was to remerge as Denel board chair in 2015, with the appointing minister at the time, Lynne Brown, pleading ignorance of Mantsha’s serious historical career blemish.

“Mr Mantsha must have been chosen by the Guptas,” Zondo said.

In the scathing high court judgment of 2007 that took away Mantsha’s licence to practise as an attorney, he was found wanting on many serious acts of misconduct, including:

Zondo writes that it is difficult to fathom that Brown would have missed such a judgment, which had been on public record for eight years at the time of Mantsha’s appointment at Denel.

But dots connect when the commission found that Mantsha was introduced to Denel boss Riaz Saloojee by Gupta foot soldier Salim Essa before he was officially unveiled as board chair.

After Mantsha’s takeover at Denel, Zondo found, the race to the bottom ensued — but that this could have been avoided easily by flagging Mantsha for previous misdemeanours.

The ball is now in the court of the Legal Practice Council to decide if Mantsha is fit to be an officer of the court.

“It is recommended that the Legal Practice Council should investigate how Mr Mantsha got readmitted if he did get readmitted as an attorney,” the report reads.

“If he did get readmitted, he should have been expected to have taken the court into his confidence and explain a number of things that the judgment referred to above says he did not explain to the court when he was struck off the roll.

“The Legal Practice Council should be made aware of the findings made by the commission against Mr Mantsha so that that body may conduct such investigation as it may consider necessary to establish whether Mr Mantsha is fit and proper to practise as an attorney,” said Zondo.

'Maybe I should not have appointed Daniel Mantsha': Lynne Brown on Jacob Zuma's former attorney

Need to catch up on the juicy bits from the second part of the state capture report? We've got you covered
News
6 months ago