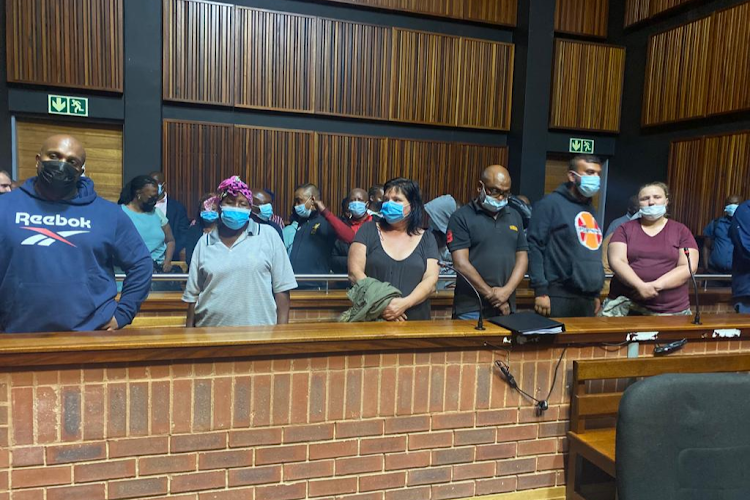 Some of the accused in the dock in connection with procurement corruption and fraud in the SA Police Service.
Image: NPA ID communications

Fifteen people who were arrested in connection with alleged corruption in the SA Police Service related to the acquisition of personal protective equipment (PPE) worth R1.9m appeared at the Johannesburg commercial specialised crimes court to apply for bail on Tuesday.

They included two serving policemen and six former policemen who were arrested on Monday morning in Gauteng, Limpopo and Mpumalanga on charges of fraud, theft and corruption.

The arrests flow from a wide-ranging investigation into procurement and supply chain management at the SAPS.

The investigation uncovered the award of numerous contracts, allegedly for the benefit of third-party front companies, which in turn facilitated kickbacks to senior police officials.

Current and former cops among 15 arrested over PPE procurement

Fifteen people have been arrested in connection with corruption at the SA Police Service for the acquisition of personal protective equipment valued ...
News
4 months ago

Chabalala said the state would oppose bail for the remaining accused because when they were arrested, they were out on bail for other matters.

Mokwena was the police national divisional commissioner for supply chain management and was allegedly involved in the unlawful and irregular award of contracts by the SAPS to companies that had Chetty as the beneficial owner.

The charge sheet alleged that Chetty, owner of Siyangoba Trading and Projects, Khoza, Ngobeni and Mahlangu falsely and — with the intent to defraud — misrepresented to the National Treasury that Siyangoba was registered as a supplier of PPE in the central supplier database, was eligible to be invited to supply latex gloves to the police and that the principal business of Siyangoba was “medical equipment and supplier”.

The state said the accused knew that Siyangoba was not registered as a supplier of PPE in the central supplier database, that it was not eligible to be invited to supply latex gloves to the police and its principal business was not as a medical equipment supplier.

Mokwena and Ramanjalum also face a count of corruption. During May and June 2020  they allegedly wrongfully and intentionally agreed to accept or accepted from Chetty or Siyangoba gratification in the form of payment of legal fees of R50,000 in respect of the “blue lights” case, in which they are also accused.

Chetty and Khoza also face a corruption charge in that the state alleges they offered a gratification to Mokwena and Ramanjalum in the form of payment of R50,000.

The unopposed bail applications will be heard first.

A former sergeant at the police crime intelligence unit was among four suspects arrested after storming into a shop and robbing staff at a mall in ...
News
4 months ago

Thrown to the wolves: how intelligence and police failed SA during July riots

SANDF emerges unscathed from expert panel’s report. The same can certainly not be said of other security branches
Politics
4 months ago

A police officer was killed in a cash van robbery on Friday and another cop and three security guards were wounded.
News
4 months ago