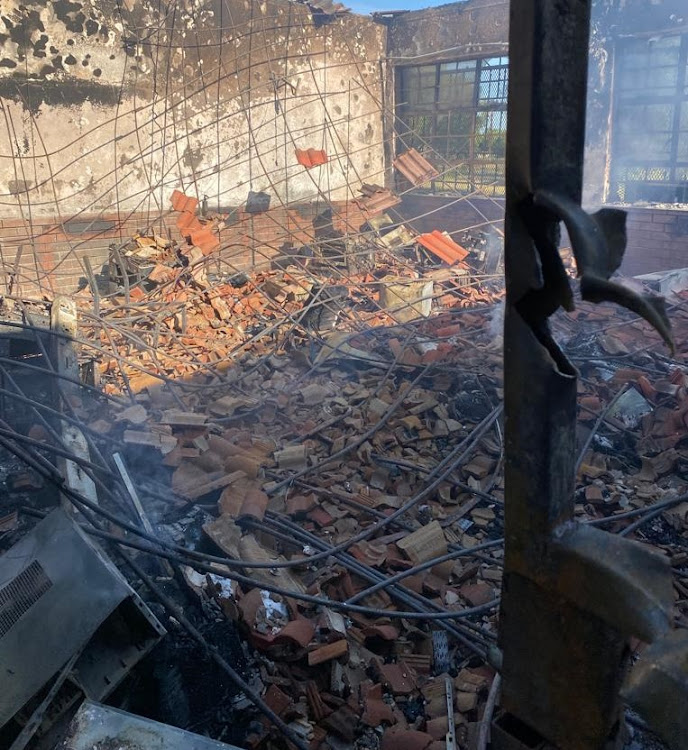 Though the cause of the fire at Ramotse Primary School in Luka Village was not established, the school suspected "criminal activities".
Image: supplied

A school near Rustenburg was gutted by fire on Saturday night, the North West department of education said on Sunday.

Education departmental spokesperson Elias Malindi said though the cause of the fire at Ramotse Primary School in Luka Village had not yet been established, the school suspected “criminal activities”.

“The school has opened a case of arson with the local police station.”

“The fire destroyed a computer lab with 40 computers, photocopiers, printers, a mathematics lab, one projector, one screen, manipulative cupboard, interactive board and 18 tables, the National School Nutrition Programme storage which was food for learners, stationery and textbooks, and a block of toilets for the girls and boys,” he said.

“I take this moment to condemn in its strongest terms the alleged burning of Ramotse Primary school. Such incidents are clearly targeted at delaying the provisioning of education to an African child.”

“These incidents are aimed at destroying the right to education enshrined by the SA constitution. We wish the full might of the law to find those responsible and send them to jail where they belong”, said Matsemela.

The state has withdrawn the case against the man accused of setting St George’s Cathedral in Cape Town on fire.
News
6 months ago

Seven months after July unrest, police simply do not know how the fire started, as environmental impact takes its toll
News
6 months ago

Dean of the St George's cathedral Rev Michael Weeder suspected the fire was an act of arson.
News
6 months ago