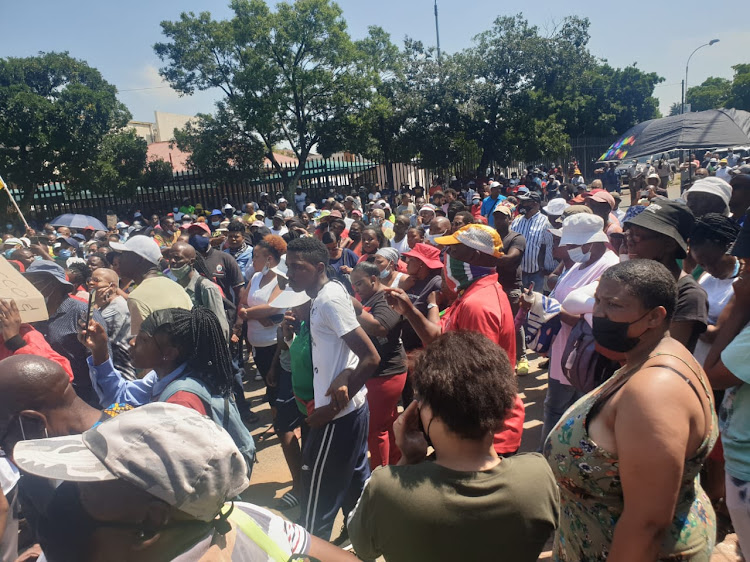 Police used rubber bullets to disperse some of the crowd outside the school.
Image: Belinda Pheto

“All I want is peace and a healthy environment for the children.”

These were the words of Bishop Tekane Matome, chairperson of faith-based organisations on the West Rand, as police fired rubber bullets to disperse a volatile crowd outside Hoërskool Jan Viljoen in Randfontein on Monday.

Gauteng education MEC Panyaza Lesufi was at the school to investigate the cause of a violent fight there on Friday and subsequent allegations of racism.

While some parents chanted struggle songs and others stood with folded arms at the school gate, Matome stood on the sidelines praying. 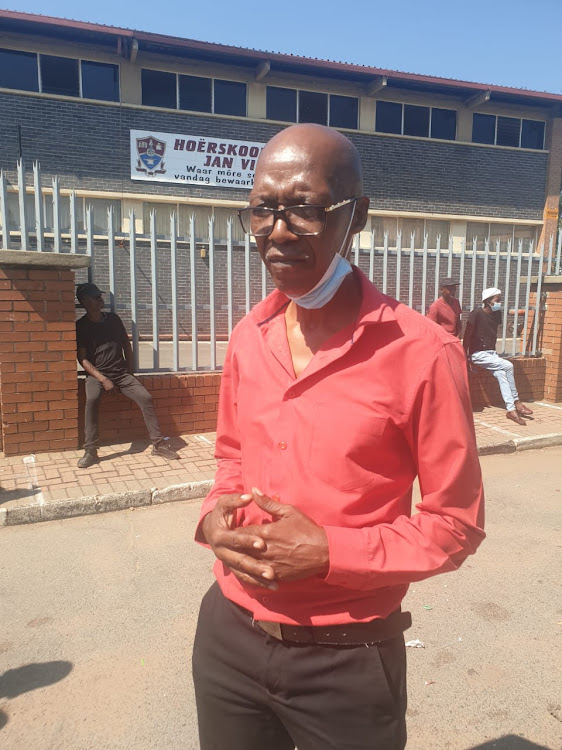 “I am praying for peace and asking God to come into the hearts of every parent here to make them aware of the responsibility they have as parents, to know and understand they need to raise their children to be responsible people in society,” Matome told TimesLIVE.

Video footage of a fight between a male and female pupil has gone viral online.

Johan van Wyk, who was among a group of people outside the school, said some people had arrived to protect the school and did not have children at the facility. He did not condone what happened on Friday, but was against destruction of property.

“I’m here to make sure nothing is broken, because if it does get broken it will need money to be fixed, money we don’t have.”

Andre Viljoen says he feels the school failed to deal with the situation and says things should never got to this stage. "They should have dealt with the two learners immediately." #HoërskoolJanViljoen @TimesLIVE pic.twitter.com/letaVgARJm

Parent Andre Viljoen said he was there to ensure pupils were not hurt.

“The situation should never have got to where it is now. The school management should have dealt with it immediately and applied appropriate disciplinary measures on the perpetrators,” said Viljoen.

Another parent, Lucia Mosia, expressed anger and disappointment at Lesufi meeting the school governing body (SGB) but not parents who had complained.

“We are the ones who called him here, but he didn’t bother to meet us. We are the people who alerted him about what is happening here.”

She believed the school was protecting a perpetrator in the fight as it appeared no action had been taken against him.

“He should have been suspended already. Violence should not be tolerated. It is a boy who assaulted a girl. That is gender-based violence.”

Lesufi later told parents he had handed evidence related to allegations of racism to police and the SA Human Rights Commission (SAHRC).

“I have handed over all the WhatsApp texts and everything to the human rights commission and police for them to take action.”

Earlier, he met the management of the school and governing body to get a comprehensive report on what transpired on Friday.

“I come to you ashamed and embarrassed as a person responsible for education in our province. Most of you didn't go to work today [Monday] because of an incident that happened here on Friday. That incident cannot be condoned and protected, it must be condemned,” Lesufi said.

Based on reports received from the SGB and principal, there were teachers and pupils who needed to explain their role. “What we have gathered so far, all the evidence, all the WhatsApp messages ... all the messages that came from you as parents, we have handed them to police and the human rights commission because we want this matter to receive the attention it deserves.”

He thanked parents who came to the school for “demonstrating their rejection of any form of racism”.

“This country belongs to all of us and we are not going to be treated as step-children in our own country. We are not doing anyone a favour by enrolling our children in schools.”

He pleaded with parents not to resort violence. “Let's demonstrate to our children that as adults, we can resolve our problems peacefully.”

The beginning of the school year was again marked, as in previous years, by overcrowded schools. Chris Barron asked Panyaza Lesufi, MEC for education ...
Opinion & Analysis
4 months ago

In damning ruling, court orders Gauteng education department to discipline officials who have failed to act
News
4 months ago