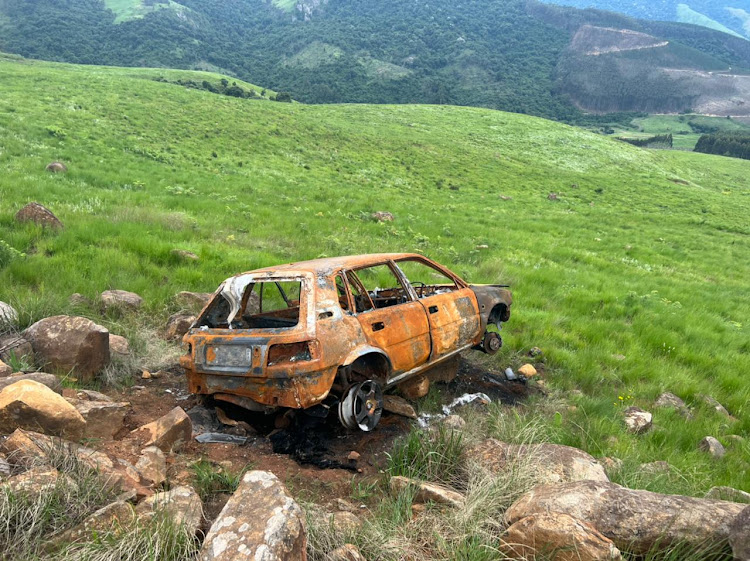 A joint operation by the police after the arrest of two men led to the gruesome discovery of the bodies of a family of five and their vehicle in Richmond, KwaZulu-Natal.
Image: SAPS

Emotions ran high in the Richmond magistrate’s court on Monday where a policeman  described in chilling detail how two siblings had allegedly killed a family of five, sparked by an apparent land feud.

State prosecutor Andre de Nysschen opposed bail for Mhlonishwa Zondi, 22, and Khulekani Zondi, 35, in connection with the murders of five Boston family members who were discovered in a Richmond plantation last December, on the grounds that the attack was premeditated.

On November 16, the victims were reported missing from a farm in the KZN Midlands.

The state had earlier arrested two other suspects, aged 25 and 27, but the charges were withdrawn.

The Zondi brothers were caught in eMaswazini on the outskirts of Pietermaritzburg this month. They face five charges of murder, kidnapping, robbery and defeating the ends of justice.

The court heard chilling evidence on events that allegedly led to the kidnapping and later murder of the five, some of whom had their throats slit and were later doused with petrol, from investigating officer Sgt Nhlanhla Mzimela from the organised crime unit.

Mzimela said evidence showed that when the attackers arrived on the farm, they overpowered Ngcobo, who was farming the land, held him down and slit his throat with a knife. They then bundled his body into a Toyota Tazz.

They then turned their attention to Zondi, their stepmother, Khuboni and the two young children by tying their hands with wire, sealing their mouths with Sellotape and dumping them into the back of Mhlonishwa’s bakkie.

They drove to a forest in Richmond.

PODCAST | Why are SA’s most deadly convicted criminals up for parole?

Mzimela said they first slit Khuboni's throat with a knife, followed by Zondi. He said Mhlonishwa tried to quieten the screams of the baby by throwing her into the forest but another suspect — who is still at large — slit the baby's throat. The two-year old met the same fate and the bodies were stacked together.

Mzimela said Mhlonishwa poured petrol over them before Khulekani set them alight.

Mzimela said should the accused be granted bail, the public would lose trust in the criminal justice system.

“I am saying this because such crimes are very problematic. There is a strong likelihood that the accused could also interfere with witnesses,” said Mzimela.

The policeman added they were preparing to make further arrests, as six people had allegedly hatched the plan to kill the family.

According to Mhlonishwa Zondi’s affidavit, he operates a tuck-shop, derives an income of R3,000, and supports his two minor children whose mothers are unemployed.

He said he didn’t have a criminal record, unlike his younger brother, Khulekani, who served prison time for rape and was released on parole in 2019.

Mkhwanazi put it to Mzimela that the police may have been buckling under pressure to make the arrests so as to impress police minister Bheki Cele and the media.

The magistrate is expected to make his decision on bail on February 28.

Two KwaZulu-Natal men charged with the murder of five Boston family members in November appeared briefly in the Richmond magistrate’s court on Monday.
News
5 months ago

KZN family living in fear after four relatives gunned down

The relatives of a Pietermaritzburg family who were gunned down at their home last week fear for their safety.
News
5 months ago