Future up in smoke for Durban informal traders after building fire 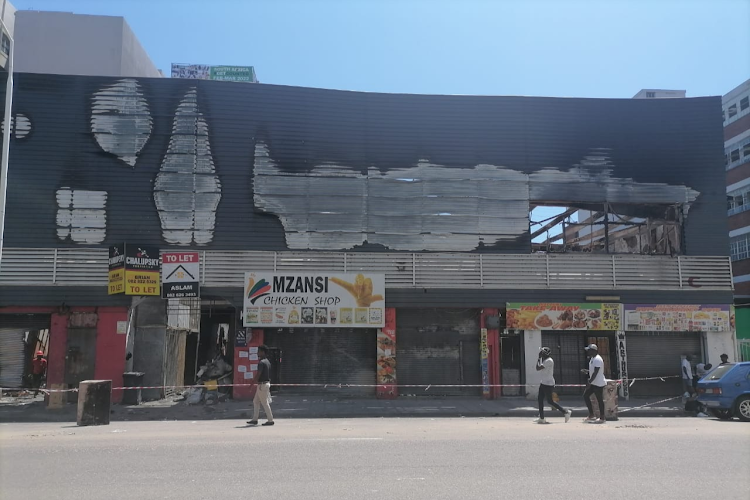 Two weeks after a fire burnt down at least seven shops and a storage facility in Durban central’s AB Xuma (Commercial) Street, informal traders are still trying to pick up the pieces.

The fire which broke out on February 9 destroyed a small section of the building that is rented out to informal traders.

The traders told TimesLIVE on Thursday they are still trying to come to terms with the fire and work out how to continue their businesses. Some of them said they still go to the building to find business from their old clients or just to seek comfort with each other.

“Basically we just come here every day to see if any of our customers came to see us. It’s also better to be around people who understand your challenges because you can brainstorm and find a way forward together,” said Safari Balemba, a Congolese national who owned a computer shop.

Pheston Mokili, who owned a hair salon, said he was operating from different salons and shared the money he makes with them.

“I do haircuts, so if my customer comes I just go with them to another salon and work from there. We then split the money 50/50. That's how I survive these days.”

KZN on the road to recovery after July riots, says premier Sihle Zikalala

KwaZulu-Natal is on the way to economic recovery after the July 2021 unrest that brought the province to its knees, says premier Sihle Zikalala.
Politics
4 months ago

Leckson Phiri, owner of a cellphone repair business, said he is now operating on the street outside his shop. This, he said, was “bad for his business because people don’t trust a business that operates from the side of the road”.

Balemba said he had been offered space at a new site, but he was struggling to raise funds.

“I had paid my rent on the morning of the fire so I don't have any money now. The landlord has not come to give us a way forward or tell us when we will get our deposit back.”

He said he lost 36 computers to the fire, including those belonging to clients.

“Some clients understand my situation but others are saying it’s not their problem. What’s worse is that even the books that I kept my records on were inside, so I don’t know who still needed to pay me or who had left their stuff with me when it all happened. I may remember some but I don’t know the exact figures, so I don’t even know who I owe or who owes me.”

Phiri said efforts to get deposits back from the landlord were unsuccessful so far.

The South African Informal Traders Alliance says it cannot have excessive tax increases on products its members sell as customers are already under ...
News
4 months ago

The manager of the building, who introduced himself only as Mo, told TimesLIVE that the building was not insured and the section of the building that caught fire was leased to a private tenant who in turn sublet to the traders.

He said they "suspected arson" but were doing their own investigation and had not yet opened a case with the police.

“We are waiting for the report from the fire department but we have heard people say it was burnt by people using petrol. They say it’s some political thing but we are nowhere with the investigation.”

Willard Msweli, chair of the Durban Informal Traders' Association, said he was unsure about the assistance they could provide to the traders.

He said getting the deposits back was difficult and feared the business owners would have to “start again from the bottom”.

Businesses in the precinct in Durban in which the China Emporium was gutted have been evacuated, the eThekwini municipality said on Friday.
News
4 months ago

When paramedics arrived at the scene, the house and four vehicles were on fire.
News
4 months ago

Nine vehicles belonging to staff and security members of the Durban University of Technology’s Indumiso campus in Pietermaritzburg were petrol-bombed ...
News
4 months ago