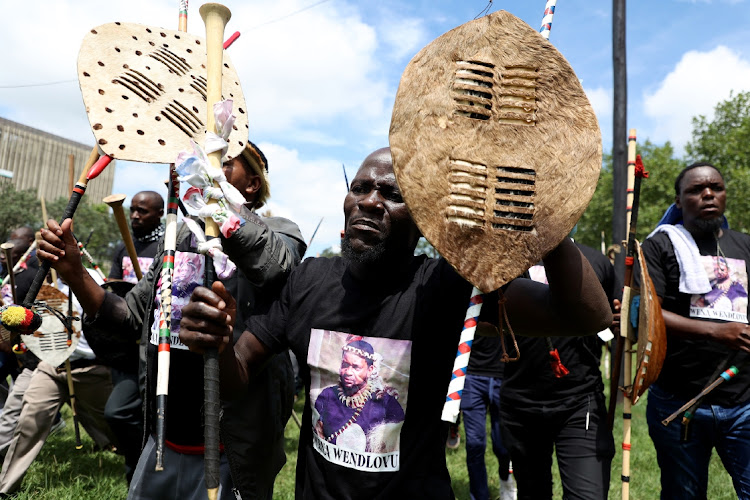 With shields in hand, amabutho made their voices heard outside the Pietermaritzburg high court on Wednesday.

As judge Isaac Madondo concluded a lengthy judgment, crowds of supporters of king in waiting Prince Misuzulu kaZwelithini gathered in the streets outside the court.

Madondo's ruling opens the door for Misuzulu's coronation to go ahead. “He is the undisputed successor to the throne,” Madondo said.

However, he ruled that an interdict application questioning the validity of King Goodwill Zwelithini's will can go ahead. This application had to be launched within 15 days or the interdict would lapse.

The coronation of Prince Misuzulu kaZwelithini as the king of the Zulu nation can go ahead, the Pietermaritzburg high court ruled on Wednesday.
News
2 months ago

Outside court, some could be seen wearing their allegiance on their chests, as they marched with T-shirts showing Prince Misuzulu's face.

Dozens of supporters from the Mzimela tribal authority in Northern KZN have also descended into the Pietermaritzburg court precinct. via Mfundo Mkhize for @TimesLIVE pic.twitter.com/YH34rvUzZs

In another video, members of the #ZuluRoyalFamily can be seen dancing and singing with supporters at Freedom Square after the PMB high court ruled that Prince Misuzulu can be coronated as the king of the Amazulu people. via Mfundo Mkhize for @TimesLIVE pic.twitter.com/vNnK4tL5Zx

Another video via Mfundo Mkhize for @TimesLIVE from the PMB high court.
Supporters arrive pic.twitter.com/SM6fDfYtJI

Amabutho (Zulu warriors) have arrived outside the PMB high court where the court is delivering judgment in the #ZuluRoyalfamily case. The case is meant to determine whether King Misuzulu is the rightful heir. pic.twitter.com/5pB7IhBjrU

IN PICS | All we want is stability in the family so we can get our funds back, says Zulu royal spokesperson

The Zulu royal household is optimistic that the family will overcome internal disputes which have seen it hauled before court and their funds frozen.
News
2 months ago

RECORDED | Judgment on King Zwelithini's will

The AmaZulu royal family will find out today if King Goodwill Zwelithini's will is legitimate. Two princesses claim the signature was forged.
News
2 months ago

Prince Misuzulu KaZwelithini received a standing ovation and a salute fit for a king when he arrived at the KwaZulu-Natal state of the province ...
Politics
2 months ago