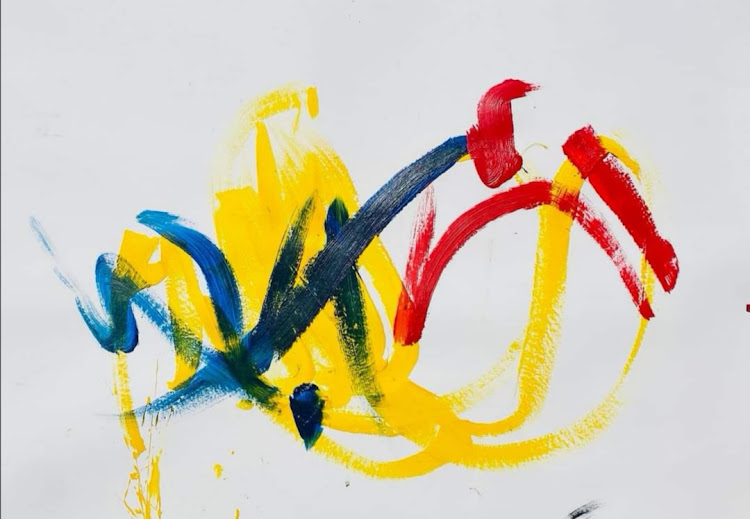 The abstract artwork by Pigcasso which sold for R33,000 within minutes to a British art collector.
Image: Supplied

Profits from the sale of an abstract artwork by SA's famous painting porker Pigcasso, depicting the Ukrainian crisis, will be donated to an animal sanctuary in the war-torn country.

Her latest work is a 1150mm x 950mm piece which includes the colours of the Ukrainian flag and what appears to be a sad face.

Pigcasso's owner Joanne Lefson told TimesLIVE the work sold to a British collector for R33,000 within minutes of it going online for sale.

The painting will include a certificate of authenticity and an original nose-tip signature.

Andrea Cisternino, an Italian former fashion photographer who settled in Ukraine in 2012, runs the animal sanctuary in Kyiv, where he cares for about 400 animals.

According to media reports he refused to leave the animals because he feared they would starve to death.

Masha the Bear was just three months old when she was removed from her mother’s care and imprisoned in a cage at the back of a van in Ukraine.
Opinion & Analysis
3 months ago

Cisternino's plight resonated with Lefson, who saved Pigcasso from the slaughterhouse a few years ago and also runs an animal sanctuary in Franschhoek in the Western Cape.

“While there are no winners in war, all the profits from the sale of this striking masterpiece will be given to Andrea Cisternino’s Rifugio Italia KJ2 in Kyiv.

“It's Pigcasso’s way to help his animal sanctuary sustain the basics during this crisis.”

The abstract impressionist has reeled in millions of rand in sales over the past five years and has an impressive worldwide following.

She has brought home the bacon time and again with her works, her own wine label and by becoming the first non-human to be commissioned by Swiss watch giant Swatch to produce artwork for one of its timepieces.

Pigcasso was rescued a month after birth from an industrial pork operation on the outskirts of Cape Town in 2016.

When Lefson noticed the pig had a knack with the old paintbrushes accidentally left in her stall, she decided to nurture the animal's interest.

At five years of age and 700kg, she has created more than 400 artworks and sold most of them.

The roads are bumper to bumper with people trying to get out with their families, says an ex-Capetonian living in Kyiv.
News
4 months ago

Within 72 hours of its release, the newest masterpiece by SA's famous painting porker Pigcasso was snapped up by a German art collector for just more ...
Lifestyle
6 months ago

Hollywood star is star-struck by a painting porker, Pigcasso

It took about an hour for Pigcasso, the world’s first painting pig, to become R25,000 richer after completing an artwork commissioned by Hollywood ...
Lifestyle
1 year ago