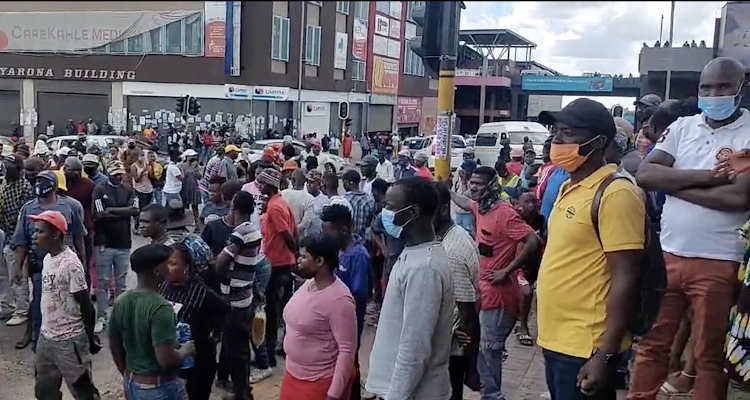 Residents and migrant shop owners clashed in Alexandra on March 7 2022. Residents, who said they belong to the Dudula Movement, want undocumented migrants to leave the area.
Image: Screengrab/ Siviwe Feketha

The Dudula Movement is a separate community organisation to Operation Dudula, which has held protest marches against foreign workers.

The community members were allegedly searching for migrant employees and shop owners who did not have valid paperwork.

The SABC's Chriselda Lewis reported that several people were injured during a confrontation between migrants and residents. The Sowetan also reported this, though the number of those injured is not clear.

#OperationDudula supporters in Alexandra in a tense confrontation with foreign nationals who are street vendors today as they resist eviction from the streets. Some have been injured during the altercation as locals vow to stop illegal immigrants from operating. pic.twitter.com/wuJ2uSPH5v

After the clash, several shops closed their doors. It is not clear how community members identified who is undocumented.

Alexandra councillor for ward 116 Adolph Marema said there was growing unhappiness in the community.

“Residents feel aggrieved that there is a majority of non-documented foreign nationals who are participating in economic activities when they are supposed to be the ones that are benefiting. There is a pushback, seeing that government is not doing anything about it, the law enforcement agencies are becoming spectators to the situation and now there is a clash between [South Africans] and the brothers from neighbouring countries,” he said.

“The situation is bad, the word bad is an understatement. The ignorance of government and the law makers who are parliamentarians in dealing with the issues, they are actually dismissing and excusing the issue instead of attending to the issues and this becomes a problem.”

He said government needs to find a way to subsidise South Africans in their businesses.

“You can’t have a mall full of shops and they are owned by people not even staying in Alex, it's wrong ... There is a level of people saying that they agree that foreign nationals who are not documented must be pushed out, but it must be done within the ambit of the law.”

#OperationDudula supporters at the Alexandra magistrate court, singing anti-immigrants chants as they insist that they will take their "cleanup" to the township. The police are keeping a distant presents from the group as they monitor the situation. @SowetanLIVE pic.twitter.com/waXigAKPUo

Several people have been injured in Alexandra Township, after clashes between foreign nationals and South Africans. #OperationDudula is in the area. Shops here closed. #SABCNEWS pic.twitter.com/HFCfPr2Ee1

Shops being forced to close in Alexandra, North of Johannesburg#SABCNEWS pic.twitter.com/H7EFzsUmQg

#DudulaMovement Another man injured in standoff between South Africans and foreign nationals in Alexandra.#SABCNEWS pic.twitter.com/9zvqTTAmEa

One of the street vendors in a scuffle with #OperationDudula supporters as they march through towards the Alexandra magistrate court. pic.twitter.com/HJffWXAHoW

Thulas Nxesi on Operation Dudula: 'Locals can protest, but violence is not the answer'

Nxesi said while South Africans are empowered by the constitution to protest, they are not empowered to take part in violent activities targeted at ...
News
2 months ago

Mmusi Maimane said for SA to think of itself as an island away from the continent was unfair and problematic.
News
2 months ago