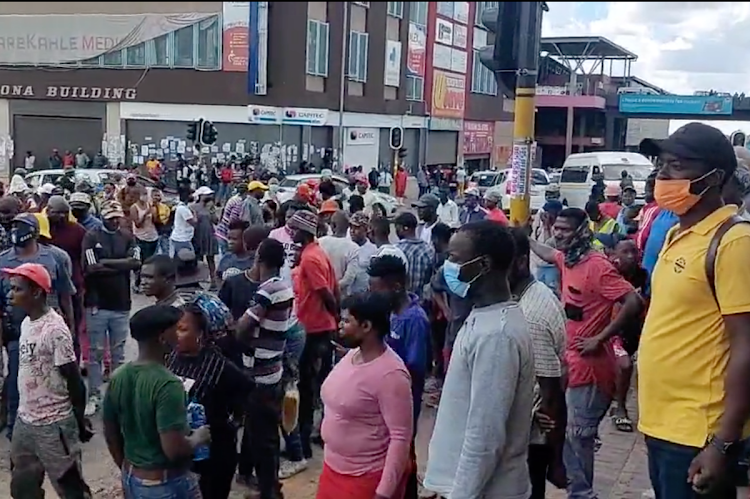 Residents and migrant shop owners clashed in Alexandra on March 7 2022. Residents, who said they belong to the Dudula Movement, want undocumented migrants to leave the area.
Image: Screengrab/ Siviwe Feketha

The Johannesburg metropolitan police department (JMPD) and SA Police Service are monitoring the situation at Alexandra in northern Johannesburg after a clash between members of the Dudula Movement and foreign nationals on Monday over ownership of market stores and businesses in the area.

The community members were allegedly searching for migrant employees and shop owners who did not have valid paperwork.

JMPD spokesperson Xolani Fihla said there is a heavy police presence after Monday's clash. “The situation is calm at the moment with no crowd on site,” he said.

#OperationDudula campaign by the Alex Dudula Movement on hold at the Alexandra CBD as the JMPD and the SAPS are maintaining a heavy presence in a bid to block the flare up of clashes between locals and foreign nationals. @SowetanLIVE pic.twitter.com/v515xU0T8e

Schooling is proceeding as usual on Tuesday. The Gauteng education department said no reports of disruptions at schools in the area have been received. The department’s spokesperson, Steve Mabona, said they are monitoring the situation closely.

“We would like the community to refrain from disrupting schools as it is difficult to recover lost contact time,” he said.

Fihla said officers will continue to monitor the area and act swiftly on any disturbances.

The councillor for ward 116 in Alexandra, Adolph Marema, said there were still tensions after Monday's confrontation.

“We will in the end try to get involved but I think it’s at an early stage. I am wishing and hoping that home affairs, the SAPS and JMPD will try to contain the situation for now but there must be some conversations around what is happening there,” he said.

“It’s a tricky situation. While I agree or sympathise with South Africans, I also caution that we must be very careful on how we handle this matter so that it doesn’t turn into a xenophobic event,” Marema said.

At least 10 people were injured during clashes on Monday.

One of the street vendors in a scuffle with #OperationDudula supporters as they march through towards the Alexandra magistrate court. pic.twitter.com/HJffWXAHoW

#OperationDudula supporters in Alexandra in a tense confrontation with foreign nationals who are street vendors today as they resist eviction from the streets. Some have been injured during the altercation as locals vow to stop illegal immigrants from operating. pic.twitter.com/wuJ2uSPH5v

#OperationDudula supporters at the Alexandra magistrate court, singing anti-immigrants chants as they insist that they will take their "cleanup" to the township. The police are keeping a distant presents from the group as they monitor the situation. @SowetanLIVE pic.twitter.com/waXigAKPUo

Illegal foreigners crises in @CityofJoburgZA @Our_DA cowardice @mphophalatse1 avoids choosing to target native pensioners in Soweto over electricity will result in her being fired as Mayor: mutliple marches #OperationDudula #PutSouthAficansFirst made she never present! 🗑🚮 pic.twitter.com/OacP8sPHSh

After the clash, several shops closed their doors. It is not clear how the organisation identified who is undocumented.
News
3 months ago

‘It does not make us xenophobic’: Modise defends police identifying suspects by nationality

“I have no problem with the police keeping mum about the nationalities of offenders but I think sometimes we are too shy to say to people who cross ...
News
4 months ago