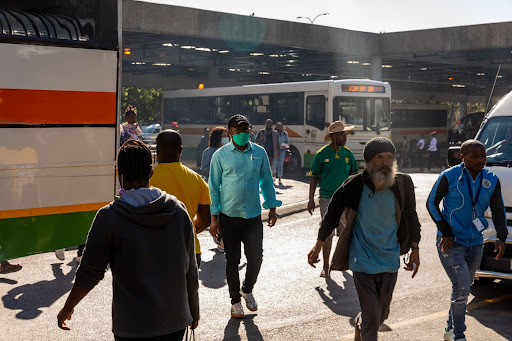 SA’s economy has rebounded from a coronavirus-induced contraction in 2020.
Image: Bloomberg

SA’s economy expanded at its fastest pace in 14 years in 2021, rebounding from a coronavirus-induced contraction the year before.

Gross domestic product (GDP) grew 4.9% after shrinking 6.4% in 2020, according to a report released by Stats SA on Tuesday. The biggest increase since 2007, the expansion beat the 4.8% median estimate of 29 economists in a Bloomberg survey and the National Treasury’s forecast in its annual budget last month.

GDP expanded 1.2% in the three months through to December from the previous quarter, after a revised 1.7% contraction in the prior three months. The growth rate matched the median estimate of 14 economists in a separate Bloomberg survey. GDP grew 1.7% year-on-year in the fourth quarter.

Growth in the fourth quarter was crimped by travel bans just before SA’s summer holiday season splash during a wave of Covid-19 Omicron infections and surging fuel prices.

While the faster rebound in the 2021 number bodes well for SA's return to pre-Covid-19 levels of economic output this year and government’s efforts to rein in high debt, the war in Ukraine is likely to curtail growth going forward.

Research shows degrees may have little effect on economic performance

The University of Stellenbosch Business School study found that school-leavers with grades eight to 11 have the most significant “concretely ...
News
2 months ago

About 90% of cargo in SA travels by road, said Walters. “The economy is dependent on road transportation.”
Motoring
2 months ago

A culture of self-enrichment among some SA politicians and public servants is putting the democracy and post-apartheid promises of a better life for ...
News
2 months ago

Effects of Russia's Ukraine invasion will be felt by SA, experts say

While Russia’s military action in Ukraine might seem far away its effect is already being felt in SA markets.
News
3 months ago