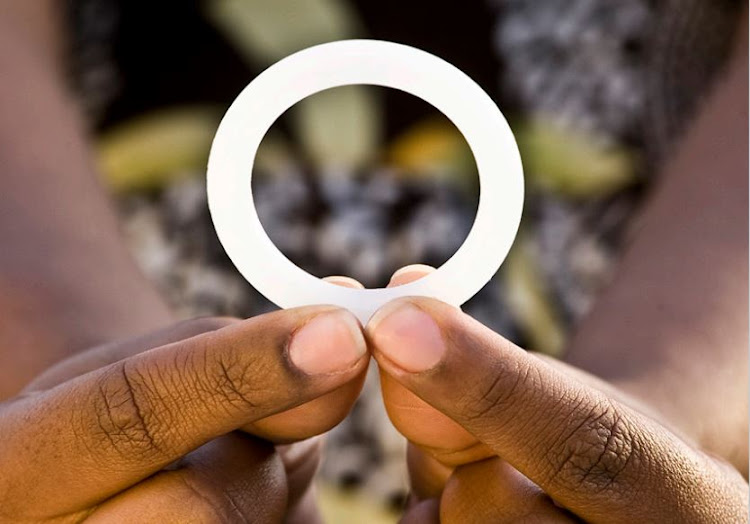 The Dapivirine ring releases an antiretroviral in the vagina and lasts a month. The ring has just been approved by the SA Health Products Regulatory Authority (SAHPRA) for use by adult women.
Image: International Partnership for Microbicides

South African women who are at risk of HIV infection will now have more options for protecting themselves against infection after the approval of a vaginal ring by the country’s regulator.

Late last week the South African Health Products Regulatory Authority (SAHPRA) okayed the use of the monthly dapivirine vaginal ring by adult women — a move which has been described by local HIV experts as a “game changer in HIV prevention”.

SA is the first country to approve the antiretroviral ring that was successfully tested in six African countries as a pre-exposure prophylaxis (PrEP).

The ring's developers, the International Partnership for Microbicides (IPM), said the first approval of the silicone ring “marks a major milestone that brings the first long-acting and woman-controlled product another step closer to reaching women”.

The ring releases the antiretroviral drug dapivirine for a month and reduces HIV infection by 35%. Its safety has been impressive in all clinical trials to date. In 2020 the ring received the thumbs-up from influential regulatory body the European Medicines Agency. The World Health Organisation (WHO) also gave it a seal of approval by adding it to its list of pre-qualified medicines.

Dr Zeda Rosenberg, IPM’s founder and CEO, said: “This approval is a positive step towards offering women more prevention options they can use to control their health on their own terms.

“We look forward to collaborating with the South African government and partners to incorporate the monthly ring into the health system, and into women’s lives in South Africa.”

Women bear a disproportionate burden of the global HIV/Aids epidemic, with nearly two-thirds of new adult infections in South Africa and across the continent occurring among women. In SA, every week, nearly 2,700 women aged 15 and older acquire HIV.

HIV experts argue that expanding women’s HIV prevention choices is critical to controlling the epidemic, and ensuring their sexual and reproductive health and rights.

Dr Zuki Pinini, the health department’s acting deputy director-general for HIV/Aids, TB, maternal and child health, said the new ring, which was tested in SA, Kenya, Malawi, Tanzania, Uganda and Zimbabwe, among other nations, could help fill a gap by offering women a long-acting HIV prevention product that “they can control and use discreetly to reduce the risk of HIV transmission”.

“It will provide an important option for women who cannot or choose not to use higher efficacy products such as daily oral PrEP.”

Women insert the product themselves and replace it every month. Made of flexible silicone, the ring slowly releases the antiretroviral (ARV) drug dapivirine directly in the vagina at the site of potential infection, with minimal exposure elsewhere in the body.

“We know that the most effective intervention is the one someone picks for themselves among an array of effective choices.”

Public health specialists and HIV experts say it is time to treat HIV and sexually transmitted infections (STIs) under one roof and not in silos, ...
News
3 months ago

Proven effective in protecting young women and others from HIV infection, now scientists want the pre-exposure prophylaxis (PrEP) to be given to ...
News
7 months ago