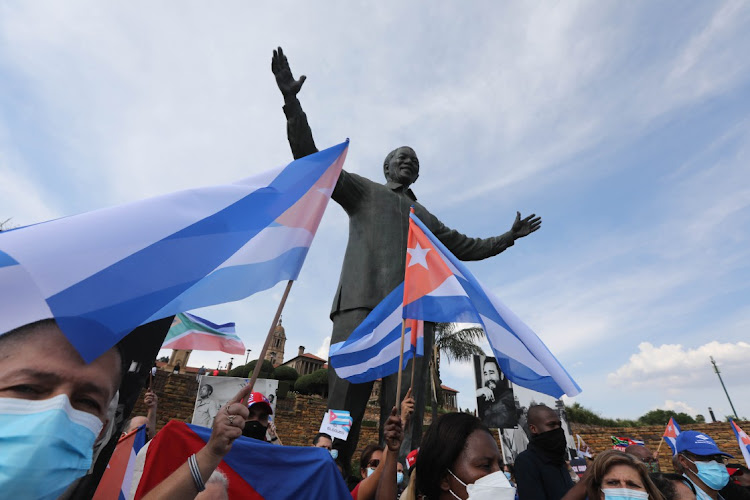 The high court in Pretoria has interdicted the government from paying a R50m donation to Cuba. File photo.
Image: Alaister Russell

AfriForum on Tuesday obtained an interdict preventing the department of international relations and co-operation from making a R50m donation to Cuba.

“AfriForum is pleased the court ruled in its favour against the ludicrous donation amid a serious economic crisis,” the organisation said.

“The interdict represented the first part of AfriForum’s legal action against the donation. The second part will involve submitting a review application at a later date to overturn government’s decision to donate the funds to Cuba.”

The court also ordered the government pay the costs of the application.

Minister of international relations and co-operation Naledi Pandor received a formal request for emergency assistance consisting of food and medical supplies from the ambassador of Cuba in July last year. She requested approval from the finance minister.

In the court papers, she said her department had requested to retain the surplus of R71m for the 2020/21 financial year and that R50m of that should be for “urgent humanitarian assistance to Cuba”.

R50m donation to ease food crisis not the only financial assistance given to Cuba: Dirco

The R50m that SA has pledged to donate to Cuba to ease that country’s food crisis is not the only financial assistance the government has given Cuba.
Politics
2 months ago

On August 13, the finance minister gave his approval for the R50m assistance.

AfriForum brought the application to halt the payment of the funds pending an application, at a later date, to review and set aside the decision to donate the amount. It argued that the entire process, from the application to the approval granted for the donation, was flawed.

The organisation said donations of state funds affect the public purse and the impact is so direct and substantial on the masses [the people of SA] that their duly elected representatives must review and consider it.

It said the retention by Dirco of the R71m should never have been granted. Had it been refused, AfriForum argued, the funds would have been channelled back into National Treasury’s revenue fund where it could have been allocated to state departments for service delivery on the national front or other urgent pressing domestic needs.

Judge Brenda Neukircher said given that the government respondents have refused to provide an undertaking not to continue with the donation pending the outcome of future legal proceedings, she was of the view AfriForum has demonstrated the irreparable harm to be suffered were this interdict not granted.

Neukircher also ordered AfriForum to launch review proceedings within 20 days of the order.

“We are pleased we managed to stop this unlawful and shameful donation in its tracks. We are optimistic our review application will succeed,” said AfriForum’s campaign officer for strategy and content Reiner Duvenage.

“AfriForum pledges to continue its fight against outrageous and wasteful expenditure which is squandering taxpayers’ money.”

'Dear Cuba, send the R50m back as a matter of urgency' — Mmusi Maimane slams SA donation

The department of international relations and co-operation (Dirco) announced last month that it will donate R50m to alleviate food insecurity in Cuba.
News
2 months ago

The organisations in the coalition led by Chefs with Compassion told TimesLIVE there was a growing hunger problem in SA which can be prevented in ...
News
3 months ago

The R50m donation was met with anger and confusion by many, who questioned why the money was being given to Cuba when so many South Africans are ...
Politics
3 months ago