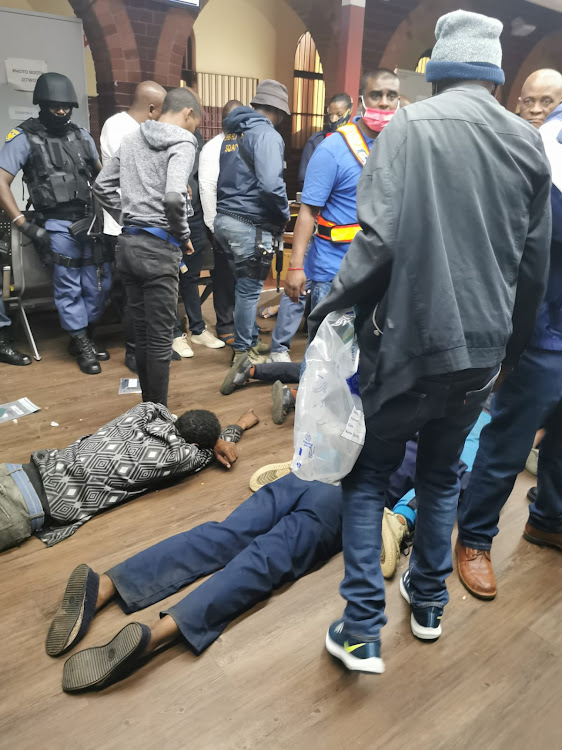 Home affairs minister Aaron Motsoaledi says 27 people have been arrested for their alleged involvement in a passport syndicate.
Image: SUPPLIED.

Two home affairs officials from the Krugersdorp office are among 27 people arrested for their alleged involvement in a syndicate selling fraudulent passports and documents reserved for SA citizens.

“They were doing what we refer to as a photo swap or using details of a South African to apply for a passport and then interfering with the system to insert the picture of a foreign national instead of the South African,” said home affairs minister Aaron Motsoaledi.

The arrests in the early hours of Friday morning included the alleged kingpin.

“This kingpin was working with corrupt officials of home affairs in a network that spanned Gauteng, Limpopo, KwaZulu-Natal, Eastern Cape, Western Cape and Mpumalanga. The kingpin was arrested together with two home affairs officials who are allegedly his trusted lieutenants.”

The alleged kingpin was in possession of R45,000 in cash when he was arrested.

The department of home affairs says it is using an online system for asylum and refugee management which minimises the possibility of corruption and ...
News
3 months ago

Motsoaledi said the department identified the alleged kingpin after an immigration officer picked up anomalies in the passports of two people who wanted to leave the country via Cape Town International Airport.

That official handed the two people and their passports to police.

“The police worked with the department’s counter-corruption branch to get to the bottom of this. Their investigations led them to the alleged kingpin who has businesses in Gauteng. They spent time observing how the syndicate operated.”

He said the alleged kingpin recruited foreigners, mostly Pakistanis, who wanted to acquire SA passports. Once he had a certain number, he would task his runner to recruit South Africans who had never acquired passports.

“Once the number of foreign nationals and South Africans matched he would activate his lieutenants, who would secure an office from where they would conduct their treasonous acts,” said Motsoaledi.

It is alleged the kingpin bought cars for his lieutenants, presumably to enable them to be at his disposal.

Bylaws for licensing spaza shops should be enforced whether you're South African or not, says Motsoaledi

It is alleged South Africans were recruited for as little as R500 and were promised jobs overseas which never materialised.

“The lieutenants are said to have pocketed between R5,000 and R10,000 per passport while the kingpin allegedly charged anything from R40,000 from any foreign national who wanted to acquire a passport for which they don’t qualify.”

While the investigation continues, Motsoaledi said he expected more arrests.

“Law enforcement officers have received sworn statements from people who participated in the syndicate and have turned state witnesses.

“I detest corruption. Our fight against corruption would not be as successful if we did not receive tip-offs from members of the public about acts of corruption conducted by some of our officials with whom they interact. I want to reassure the patriots who tip us off about malfeasance that we follow each tip and act decisively.”

‘If they see you, you are money’: Refugees highlight the difficulty of the system when using the legal route

Immigrants and asylum seekers say the process of getting legal documentation often involves having to pay bribes for assistance.
News
3 months ago