‘Does she think journalists are paparazzi?’: SA outraged by Dudu Myeni assaulting photojournalist 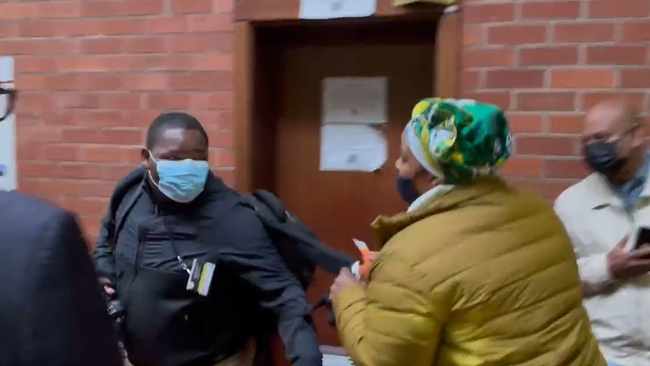 Zuma’s close ally was caught on video trying to slap the camera out of Ndlovu's hands while he was taking a photograph of her.

The group tried to avoid being photographed, but Ndlovu followed Myeni, who tried to hide her face behind Niehaus.

Here is another look at the incident surrounding Dudu Myeni and the photo journalsit Sandile Ndlovu. #ZumaCourtCase

According to Ndlovu’s version of events, the attempted assault took place near the high court entrance.

“When I entered court, she again confronted me, asking: ‘Sandile, why are you taking my photograph? You don’t do this to whites, but you are doing this to a black woman.’ I tried to engage her, but she told me not to give her an answer and literally told me to shut up.”

Sunday Times and TimesLIVE have condemned the attempted assault on Ndlovu and called on justice minister Ronald Lamola and chief justice Raymond Zondo to ensure courts are places where journalists are able to work unimpeded and inform  readers, viewers and listeners about matters being heard and the events surrounding them.

Many on social media expressed dismay at Myeni’s conduct and called on the SA National Editors’ Forum to intervene.

She is within the premises of the court n can never avoid cameras, if she didn't want to be photographed she should have stayed at home.

Besides no one is harassing her... people just want to justify nonsense... Dudu has been photographed many times with Zuma at al and she never showed discomfort... suddenly she doesn’t feel comfortable. She must just stay home if she doesn’t want to be photographed. Simple!

If you're a public figure and you don't want to be photographed by journalists, thesyay at home - hlala ekhaya! If you want your privacy, stay out of the public spaces.

Despite torrential showers, there was no raining on Jacob Zuma’s parade

He may not have been in court, but there was plenty of drama, including a scuffle involving Dudu Myeni.
News
2 months ago

EDITORIAL | With a rap sheet like Myeni’s, she should hide her head in shame

Former SAA chairperson Dudu Myeni appeared in the Johannesburg magistrate’s court on Tuesday to face charges including defeating the administration ...
News
2 months ago