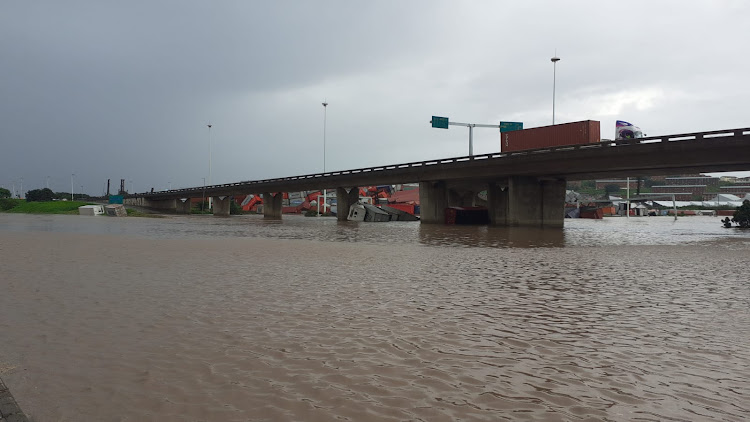 The eThekwini municipality said on Tuesday the city had suffered an unprecedented amount of damage to infrastructure though landslides and flooding overnight.
Image: supplied

The supply of electricity and water, burials, healthcare services and refuse removal has been affected by the severe flooding throughout Durban.

The eThekwini municipality said on Tuesday the city had suffered an unprecedented amount of damage to infrastructure though landslides, flooding and washaways overnight.

"The city’s emergency personnel have been responding to calls throughout the night and have been working around the clock to restore services as soon as possible. The city calls on the public to be patient and understanding as there will be delays in restoring services," said municipal spokesperson Msawakhe Mayisela.

He said numerous areas suffered water and electricity outages caused by loss or damage to infrastructure.

The municipality would not accept any requests for burials until the weather cleared.

"This is due to the ground being saturated. The city calls on the public to postpone any burials until the city cemeteries are able to conduct these again," said Mayisela.

Refuse would also not be removed.

"The city would like to advise residents of the suspension of street sweeping and refuse removal services.  Residents are requested to keep refuse inside their properties to avoid spillages and blockage to storm water drains. Garden sites are also not operational and cannot accept any waste during this period," said Mayisela.

At least 45 dead and figure set to rise after devastating KZN floods: MEC

At least 45 people have lost their lives during devastating rains that have battered KwaZulu-Natal, leaving destruction in their wake since Sunday.
News
3 months ago

Bus services were temporarily disrupted due to flooding at depots. Mayisela said many routes are inaccessible.

Some healthcare facilities could not operate due to damaged infrastructure and staff being unable to get to work due to road closures.

"The municipality will continue to assess the situation and advise the public of developments," added Mayisela.

During a briefing on Tuesday, mayor Mxolisi Kaunda said initial investigations showed that the storm damage was influenced by landslides as opposed to poor drainage systems.

“One of the fundamental factors that have influenced incidents in many areas where we received reports, is that they are as a result of the landslides. It has nothing to do with the drainage system but they are in areas where there is soil that is moving. So if those houses are built on steep hills then it may wash away.”

He said they were "surprised" by this storm because it was different from those of 2011, 2017 and 2019 and affected many areas within the municipality.

Kaunda said the city was being aided by the city of Cape Town which was sending a helicopter to aid with air support.

He said provincial co-operative governance and traditional affairs MEC Sipho Hlomuka would reveal the number of fatalities and those missing.

The 'iconic' traffic circle in the seaside town Umdloti, north of Durban, was washed away by heavy rain on Monday night.
News
3 months ago

Images of collapsed roads, sinkholes and washed-away bridges have flooded social media platforms after torrential rains in KwaZulu-Natal since Monday ...
News
3 months ago

Shipping containers were floating on the flooded N2 highway near Durban’s old airport on Tuesday morning.
News
3 months ago

The supply of electricity and water, burials, healthcare services and refusal removal has been affected by the severe flooding throughout Durban.
News
3 months ago