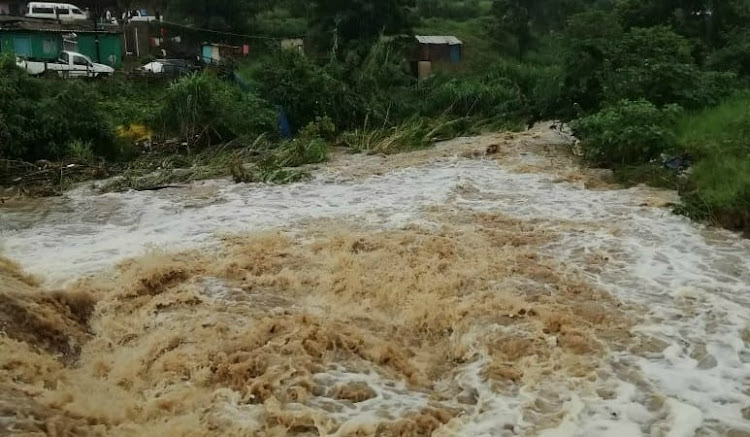 Households across KwaZulu-Natal were without water on Wednesday after heavy rain in the province.

Umgeni Water said the rain over the past four days had caused substantial damage to some of the utility’s raw water abstraction and conveyance infrastructure in at least three regions.

“Following early assessments, Umgeni Water reports that two aqueducts, which convey raw water to the Durban Heights water treatment works, broke, through rock falls in the vicinity of Inanda. The aqueducts have since been taken out of use due to the risk they pose to property and people.

“Other damage reported on Tuesday has confirmed the river abstraction system in Mtwalume River on the south coast is not functioning because of blockages caused by the flooded river. Abstraction from the Umzinto River dam has reduced significantly due to high overflows, resulting in only 60% of potable water that is required being produced at Umzinto water treatment,” the water utility said.

Two aqueducts damaged in the rock fall are among four aqueducts that convey water from Nagle Dam for treatment at the Durban Heights water treatment plant.

“The consequence has been that the plant is receiving raw water from only two functioning aqueducts. The plant is treating half the amount it usually treats and supplies daily. Water treated at this plant is conveyed to eThekwini water and sanitation, which supplies consumers in the north, south, central and inner west regions of Durban.

“The potable water shortfall means eThekwini water and sanitation is unable to meet the full requirements of consumers. Until the aqueducts are repaired and brought back into full functionality, a deficit in raw water supply will prevail. Similarly, reduced supply of bulk potable water will continue to prevail. The impact on consumers will be experienced in erratic supply, interruptions in supply and low pressure in taps.”

Following the current heavy rainfalls in and around Durban. Most of Umgeni Water dams are full to capacity. This is no...

In iLembe, potable water production at the Lower Thukela bulk water supply scheme was reduced because of high turbidity in raw water and abstraction pumps continuing to fail as a result of silt in the abstraction channels.

“The command reservoir levels are low and supply to KwaDukuza central business district, Darnall, Zamani and Zinkwazi has been interrupted.”

Umgeni Water is unable to treat water at the plant for supply to Ugu district municipality.

“Apart from failure of the abstraction system, additional damage caused by localised flooding was loss of the standby backup submersible pumping system at the Mtwalume water treatment plant. This situation will unfortunately prevail until the level of the river subsides, thereby allowing asset management staff to reach equipment for removal and repair.

“Restoration of the standby pumping system is being treated as a priority. Water treated at this plant is received by consumers in Mtwalume, Ifafa, Bazley, Sezela and surrounding areas.”

The utility said reduced production at the Umzinto water treatment pant due to abstraction difficulties meant it was unable to meet the full demand of Ugu district municipality for supply to Umzinto, Park Rynie, Pennington, Kelso and Malangeni.

“Unfortunately this production and supply deficit will continue until Umgeni Water is able to abstract the full amount of raw water it requires. The extent of damage reported in this communique is an early assessment provided by staff who work at the sites that operate the affected infrastructure. Persistent torrential rains and impassable access routes have made it impossible for staff of Umgeni Water to reach critical and major infrastructure to conduct a comprehensive analysis.”

The scope of investigations will be extended once conditions improve.

“Based on the outcomes, a clearer picture will emerge of the magnitude of damage, what needs to be done to restore full functionality and how long this process is expected to take. Additional information will be shared with customers and consumers as it becomes available,” the utility said.

Urgent Notice We apologise for the inconvenience, please see post for full details.  For account queries or emergency...

Siza Water, which supplies towns north of Durban, said Umgeni Water had informed it the Hazelmere and Lower Tugela waterworks had been compromised.

“The raw water abstraction is blocked and the turbidities are extremely high, causing a drastic reduction in production and discoloured water.”

The supply of electricity and water, burials, healthcare services and refusal removal have been affected by the flooding in Durban.
News
2 months ago

Images of collapsed roads, sinkholes and washed-away bridges have flooded social media platforms after torrential rains in KwaZulu-Natal since Monday ...
News
2 months ago