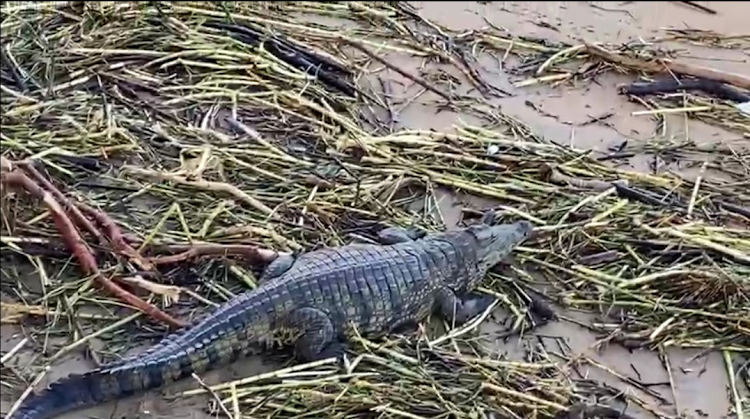 A crocodile believed to have escaped from a farm was spotted near the Tongaat River mouth.
Image: Screenshot

KwaZulu-Natal residents are on high alert after crocodiles were washed away from the Crocodile Creek Farm between Tongaat and Ballito, north of Durban, this week as floods continued to wreak havoc in the province.

The eThekwini municipality announced on Wednesday evening that nine of the 12 missing crocodiles had been recaptured with three still on the loose. It said the search for the remaining ones was continuing.

The search for the missing crocodiles is underway. The team from KZN Wildlife and the Municipality’s conservation Section is closely monitoring the situation.

Ezemvelo KZN Wildlife spokesperson Musa Mntambo told TimesLIVE on Wednesday authorities suspect the crocodiles “might have moved towards the Tongaat River which is less than a kilometre from the farm”.

The news was met with shock from social media users who urged residents in the province to be careful.

KZN Ezemvelo searching for 5 Crocodiles that were washed away by recent #KZNFloods in Tongaat. pic.twitter.com/rV4vEt6axp

KZN starting to look like the 1995 Jumanji movie, crocodiles on the loose, this is scary

So we have crocodiles on the loose and the President is in town.

Living in KZN is really wild. Apparently we must also be on the lookout for CROCODILES? 🤣

A 34-year-old KwaZulu-Natal man appeared in the Ubombo magistrate's court for allegedly killing a crocodile.
News
2 months ago

Crocodiles from a farm near Tongaat, north of Durban, were washed away during the devastating floods that hit KwaZulu-Natal.
News
2 months ago