Ten people from one family killed in KwaZulu-Natal floods 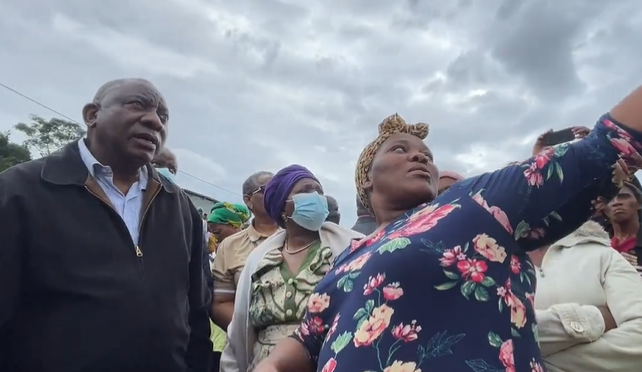 Nonkululeko Mdlalose points to the area where her family home once stood. The house was swept away during the heavy rains on Monday, leaving all 10 of her relatives who were inside, dead.
Image: Screengrab

The Mdlalose family suffered a devastating loss in the recent heavy rains in KwaZulu-Natal which resulted in floods, mudslides, building and bridge collapses and scores of vehicles and people being swept away.

On Wednesday, Nonkululeko Mdlalose, who met President Cyril Ramaphosa when he visited the flood-ravaged area, tearfully told him 10 of her family members were killed on Monday night.

“I think they were all sleeping because the incident happened at around 11pm at night,” Mdlalose said.

She said it seemed her neighbour’s brick and mortar home had crumbled , creating an avalanche that descended onto their home, sweeping everyone down the hill.

Nonkululeko Mdlalose details how their family home was destroyed by the #KZNFloods, resulting in the loss of 10 members of their family. Government is coordinating relief efforts to provide assistance to affected families for their immediate needs. pic.twitter.com/QpNyEyrKXN

“So they were all swept out by the river waters?” Ramaphosa asked her.

“Yes,” Mdlalose said as she sobbed.

Only she and her sister survived the ordeal. They were not at home when the disaster occurred.

Gift of the Givers on Wednesday said it was assisting in efforts to retrieve the body of woman who was buried under a collapsed wall in Durban North.
News
3 months ago

“We have another sibling who was no longer living at home but was in Maritzburg,” Mdlalose’s sister told Ramaphosa.

“But of all of us who lived at home, full-time with our mom, it is only the two of us who survived,” the sister added. She did not give her name.

Ramaphosa asked the ages of those who had died.

The Mdlaloses said they were between the ages of two and 80.

“We found our mom and three of her grandchildren [almost immediately] ... We then found the others but the last of the grandchildren we only found on Tuesday night. Our mom was lying alongside our neighbour down by the riverbed.”

On Wednesday night, the department of co-operative governance said at least 306 people had been killed in the disaster.

More than 300 people have lost their  lives in the KwaZulu-Natal flood disaster.
News
3 months ago

IN PICS | Flood devastation and tragedy in KwaZulu-Natal

President Cyril Ramaphosa is visiting parts of KwaZulu-Natal that have been battered by torrential rains since last weekend.
News
4 months ago

Images of collapsed roads, sinkholes and washed-away bridges have flooded social media platforms after torrential rains in KwaZulu-Natal since Monday ...
News
4 months ago