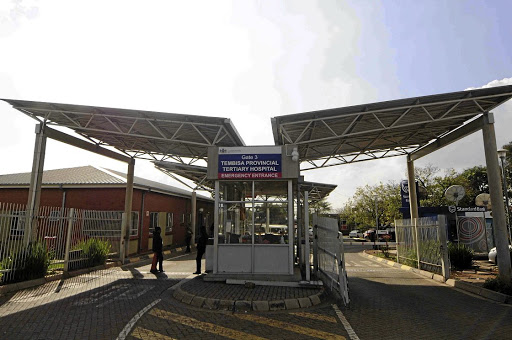 Tembisa Hospital on the East Rand is operating with 50% fewer staff than needed to adequately service the demands of 2.5-million residents.

This was revealed by the hospital CEO, Dr Ashley Mthunzi, who was giving an overview of the hospital operations to the parliamentary portfolio committee on public service and administration.

The committee was on Wednesday at the hospital for an unannounced oversight visit to the facility, which recently experienced security breaches.

Mthunzi told the committee that the hospital currently has 2,300 staff members, servicing an estimated population of about 2.5-million people. He said the hospital should at least have about 4,000 employees.

“We are servicing some of the busiest and fastest-growing areas like Midrand, Alexandra and Diepsloot. We are also servicing all three metros in the province, we get patients from Ekurhuleni, Tshwane and Joburg.”

Mthunzi said the issue of staffing was quite critical, as it affects their outcomes.

The department of correctional services on Tuesday said a remand detainee had been abducted by two armed gunmen in Thembisa, Gauteng.
News
4 months ago

Tembisa Hospital was upgraded to a tertiary hospital in 2012, but 10 years later, resources have not followed. He said they are still receiving a budget of a regional hospital and still lack some of the critical equipment that would enable them to serve patients more efficiently.

He also spoke about the overcrowding at the hospital. He said the hospital has 840 beds approved but has 1,200 operating.

The infamous maternity ward 13, which sparked an outcry on social media after images of pregnant mothers sleeping on benches because there were no beds available, is being expanded. Construction work is currently under way and the CEO said this should be completed within a month.

“We deliver about 1,500 babies every month, with 40% of them born to foreign undocumented mothers.”

Currently we have 49 security guards here. To sufficiently say we are safe, we need 50 more guards, with panic buttons, armed reaction and the likes

Mthunzi said they experience a high influx of foreign undocumented mothers on weekends, and most of them arrive almost ready to deliver.

He told the committee one solution to the overcrowding was to decommission the Kempton Park hospital which is currently not being used. He said if a district/regional hospital could be built, it would ease their load.

“Currently we are seeing patients who could easily be treated at a district or regional hospital, but because there is none, they end up here.”

MPs asked Mthunzi about security at the hospital.

Mthunzi admitted they had serious security concerns, but said there was little they could do as a hospital because the contracts were not managed by them.

“Currently we have 49 security guards here. To sufficiently say we are safe, we need 50 more guards, with panic buttons, armed reaction and the likes.”

Mthunzi told MPs that four months ago, thugs broke into the hospital and stole schedule 5 medication.

The I Serve With A Smile team embarked on a support drive to the cleaning and food services units, transporting breakfast to the wards and dishing up for patients. They went to Wards 7, 10, 14 and Accident & Emergency. pic.twitter.com/d6iaiKFtPc

Teliswa Mgweba, acting chairperson of the public service and administration committee, said they would send recommendations to the relevant committees to ensure Tembisa Hospital is properly equipped with the resources it needs to serve the residents of Gauteng better.

She also expressed confidence in the leadership of Mthunzi.

“You can see that he is passionate about what he is doing and has the best interests of patients and workers at heart,” Mgweba said.

She was impressed with the level of improvement in service delivery at the hospital.

“Patients are being attended to. We engaged with them and none of them complained about long waiting times. The hospital is clean and they seem to be on the right track of redeeming this hospital.”

Mthunzi told MPs the hospital management has introduced an initiative that encourages staff to serve with a say because they had previously received numerous complaints about the negative attitude of staff towards patients.

“So far we are receiving positive feedback from patients so it means the staff attitude is also changing.”

Tembisa Hospital has received a number of compliments from patients owing to excellent service from the staff members.

Tembisa Hospital is a hospital at work! pic.twitter.com/Y2E12KSm2m

Theatre operations at Prince Mshiyeni hospital in Umlazi have been postponed because the facility doesn't have water.
News
3 months ago

Doctor hijacked after her shift at Mpumalanga hospital

A doctor was held up at gunpoint while returning to the medics' residential quarters after completing a shift at a public hospital in Mpumalanga on ...
News
5 months ago

The family of Shonisani Lethole, who died at Tembisa Hospital of Covid-19 in 2020, says it remains determined to secure justice for Shonisani and ...
News
6 months ago