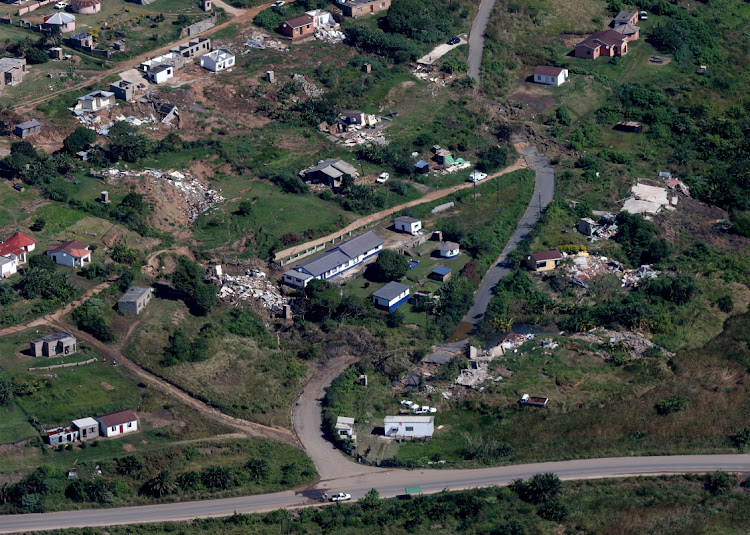 This is an aerial view of a situation where soil erosion occurred causing a road split at Umgaga, south of Durban. The road shifted from its original place and a church moved to where the road and several houses were destroyed including graves.
Image: SANDILE NDLOVU

A trap has been set at the luxury Zimbali estate on the KwaZulu-Natal north coast to catch an elusive crocodile washed away from a farm during the recent floods.

The crocodile is one of two discovered at the estate.

TimesLIVE reported two weeks ago that crocodiles on a farm near Tongaat, north of Durban, were washed away during the floods.

The education department has urged school principals in KwaZulu-Natal to accept all pupils whether or not they have school uniforms.

Basic education minister Angie Motshekga said pupils from schools affected by the deadly floods in the province will be allowed to attend classes at neighbouring schools until the extent of the damage is assessed.

Motshekga said more than 100 schools were extensively damaged and inaccessible to pupils.

In a public announcement shared by the eThekwini municipality, the department said it does not want pupils to miss out on their education and put rules in place for schools in the province.

The KwaZulu-Natal government has revised its estimated total cost of flood damage to approximately R17bn.

The province said there was an error on Sunday in its repor about damage to Passenger Rail Agency of SA (Prasa) infrastructure.

The cost estimate for resumption of service is R955.4m and long term rehabilitation work is estimated at R1.68bn.