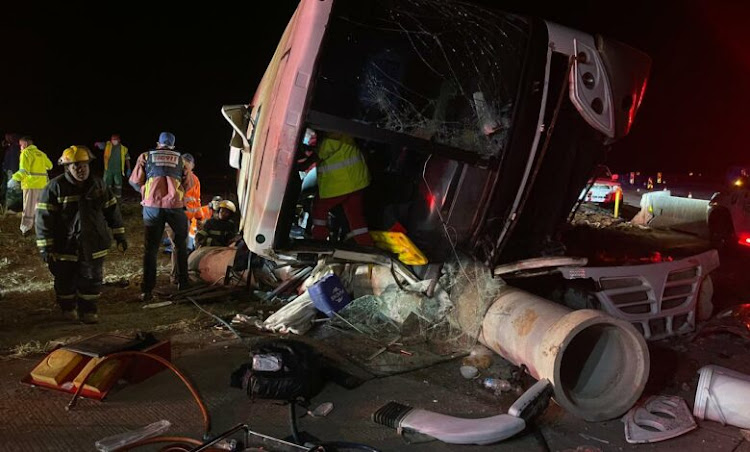 A bus loaded with 78 people crashed into a concrete barrier and overturned on the N2 north near Salt Rock in KwaZulu Natal on Monday morning.
Image: Medi Response

A bus carrying 78 wedding guests on the N2 north-bound for Nongoma collided with a concrete barrier and overturned, resulting in nine passengers being rushed to hospital.

Seven of the injured are in critical condition and two are seriously injured, according to early reports from emergency services that attended the scene.

The accident happened on the N2 near Salt Rock. Many medics responded to the scene owing to the serious nature of the crash.

ALS Paramedics Medical Services, IPSS Medical Rescue, Taurus EMS Medics, EMRS, KDM Fire, the local road traffic infringement and police all attended the scene. A triage system was quickly set up and more ambulances and advanced life support paramedics were dispatched to the scene. All the injured patients were stabilised at the scene before being transported to local hospitals.

IPSS Medical Rescue spokesperson Dylan Meyrick told the North Coast Courier advanced life paramedics worked to stabilise a critically injured passenger who was partially entrapped under the bus. They did this while KDM Fire used the jaws of life to cut her out of the wreckage.

“The bus was travelling from Umzimkulu to Nongoma carrying 78 people when it collided with a concrete barrier used to divert traffic around the damaged Umhlali River bridge and overturned,” Meyrick said.

The accident scene has been cleared and police and traffic authorities are investigating. The events leading up to the incident are unknown at this stage.

Tebogo Ntlatseng lost his mother, grandmother and other relatives on their way back from a wedding anniversary
News
4 months ago

Four family members on their way to a wedding were killed on the N2 near Mposa in northern KwaZulu-Natal on Thursday morning, while a woman in a ...
News
6 months ago

Eleven Durban children were injured when a taxi transporting them to school collided with another vehicle on Friday morning.
News
2 months ago

Too many children remain unrestrained in proper child restraint systems in vehicles in SA. This situation requires better traffic law enforcement and ...
Motoring
2 months ago

Five people were killed and seven others injured following a three-vehicle collision on the N12 between Potchefstroom in the North West and Fochville ...
News
2 months ago