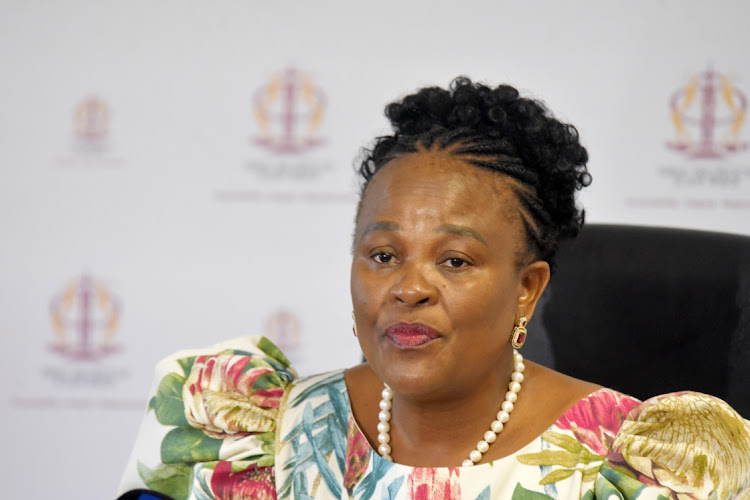 Public protector Busisiwe Mkhwebane will on Thursday lay criminal charges against the man who sent an anonymous text to one of the lawyers in her case before the high court last week. File photo.
Image: Freddy Mavunda/Business Day

Public protector Busisiwe Mkhwebane says she will lay criminal charges against Ismail Abramjee and his alleged “accomplices” at the Brooklyn police station in Pretoria on Thursday.

Mkhwebane said this followed an “unfortunate” text message Abramjee sent more than a week ago to the lead senior counsel for parliament's speaker, Andrew Breitenbach SC.

The text message led to the last-minute postponement of an urgent application in the Western Cape High Court to put the brakes on impeachment proceedings in parliament and to interdict Mkhwebane’s possible suspension by President Cyril Ramaphosa.

The public protector said on Wednesday in the text message Abramjee indicated he had it “on good authority” the Constitutional Court had decided to dismiss her rescission application in respect of its decision of February 4 and the court was to make its decision public before last Friday.

The parties in that case agreed to the postponement to “seek clarity” from the Constitutional Court as to whether the message was true.

Responding, the ConCourt said it was investigating the allegation and “the outcome of the application for direct access and rescission will be communicated to the parties when the court has finalised its processes and made its decision”.

“This suggested that the apex court's decision was leaked to Mr Abramjee before it could be made public. The decision in question has a profound bearing on the proceedings before the Western Cape High Court,” Mkhwebane said.

The Constitutional Court’s response to the revelation of the infamous text message about a pending application before it has caused “the utmost ...
News
1 month ago

It is a fundamental principle of litigation that a court judgment is confidential until the moment it is publicly delivered. One of the main reasons ...
News
2 months ago

An anonymous text message to one of the lawyers was the cause of a last-minute postponement to the court case by public protector Busisiwe Mkhwebane ...
Politics
2 months ago